Once is impressive. Twice is a record. I should have known that if it took two days to get through one of Declan Finn’s novels*, it should be a fast trip through the second one. Yet I was still surprised when I finished this book in two separate sittings: 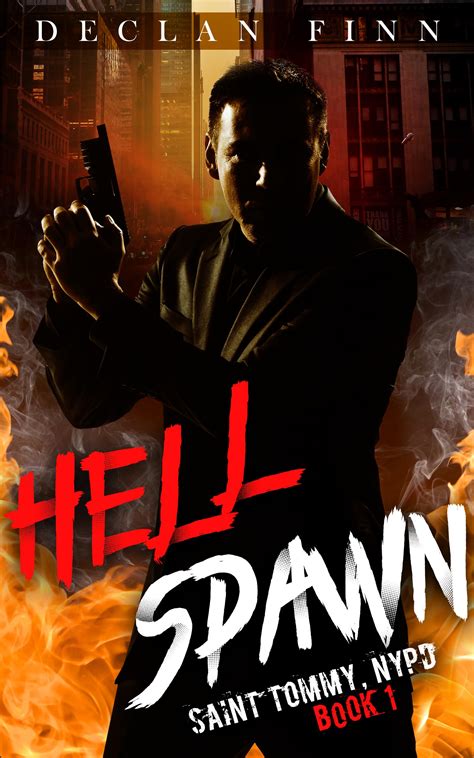 My name is Officer Tommy Nolan, and I am a saint.

Tommy Nolan lives a quiet life. He walks his beat – showing mercy to the desperate. Locking away the dangerous. Going to church, sharing dinner with his wife and son. Everyone likes Tommy, even the men he puts behind bars.

Then one day a demon shows up and he can smell it. Tommy can smell evil – real evil. Now he’s New York City’s only hope against a horrifying serial killer that preys on the young and defenseless.

But smell alone isn’t enough to get a warrant. Can Tommy track down the killer and prove his guilt?

Dragon Award Nominated author Declan Finn returns with his typical action-packed, Catholic influenced style, in this groundbreaking horror series about an honest, religious man given the powers of a saint to fight the demons in the Big Apple.

How do you do forensics on a killer possessed by a demon?

Can Tommy catch the killer before he becomes a martyr? Or will the demon bring darkness beyond imagination to the whole of New York? Read Hell Spawn today and find out!

First Dean Koontz*, now Declan Finn. The pattern is such that I am beginning to think Someone is sending us a message. And I’ll agree with another reviewer: this book made me want to go to Confession (the Sacrament of Penance), too.

Like Thomas Tan’s League of Angels*, which was reviewed here, Hell Spawn* is unapologetically Catholic. It is less in-the-reader’s-face than Mr. Tan’s work, being more along the lines of an Odd Thomas* novel. The difference is probably due to the fact that the heroes in League of Angels are priests, whereas Mr. Koontz and Mr. Finn choose to focus their tales on protagonists in other lines of work.

Speaking of the protagonist in this story, Tommy Nolan is an enjoyable person to travel alongside. On the one hand, he has all the wry, dark humor and humanity of an experienced New York City cop. But on the other he is a much more gentle lead than, say, Jack Ryan* or John McClane*. As he himself admits, he lacks cynicism – a trait which his partner, Alex Packard, has in spades.

The action in Hell Spawn lets up less than it did in A Pius Man*. Tommy literally cannot walk to work without either snagging a purse-snatcher or striding into a shoot-out. While other families would take this as a sign that it is time to move to another state, and fast, the Nolans simply shrug and check their ammunition stockpiles while saying the Rosary.

As desperately dark and scary as the novel becomes, this makes for a refreshing turn of events in the Urban Fantasy genre. Most heroes dealing with the same monster Tommy has to fight would go to ground after the third or fifth assault, have an emotional crash, then make an effort to catch the bad guy with his trousers down, only to be slapped into the pavement when the villain anticipated the hero’s next move. In contrast, the hero of Hell Spawn simply says his prayers and keeps his guns close to hand.

The fact that he is a police officer, with the friends and connections that come with the job, definitely helps Tommy do his duty. This also makes the novel stand out from the norm: most writers would have the protagonist isolate himself to limit the damage the demon could do to his friends, family, and neighbors while feeling bad over his inability to save the people around him. Having the hero refuse to back down or be intimidated is a twist the genre could stand to see more often.

Although Tommy does lose people he knows to the demon, he does not even consider hiding or “taking a vacation” to get out of the line of fire. What is the primary reason for his decision to stay? If he leaves, the demon will have the freedom to do whatever it wants, wherever it wants, to whomever it decides to target next.

Sometimes, there are benefits to drawing enemy fire. Even if that fire seems to come faster at the fighter than the water rushes down Niagara Falls.

I cannot say this book is for everyone, Catholic or not. As the warning on Amazon points out, some of the snicker-worthy jokes in this book are aimed at Catholics and Catholic institutions. Not only are these jests on the money in most cases, but they are delivered in such a way that they are actually funny. Some Catholics, however, have had their sense of humor surgically removed, so they may not regard the comments Tommy makes as entertaining. Non-Catholics who do not wish to see their sacred cows burnt to a deservedly inedible crisp will also find some aspects of the novel – humorous or not – difficult to appreciate.

But if you want a nice, straightforward Urban Fantasy thriller, Hell Spawn is exactly what you are looking for. The characters are three-dimensional while the humor is wry, dry, and occasionally socially unacceptable. The action more than speaks for itself because, even if you feel queasy during the ride, you never want the roller coaster to actually stop. You just want to ride it to the end so you know “what happens next.”

Pick up Hell Spawn through Amazon or Silver Empire today, readers. You will not regret the purchase. 😉

One thought on “Review: Hell Spawn by Declan Finn”