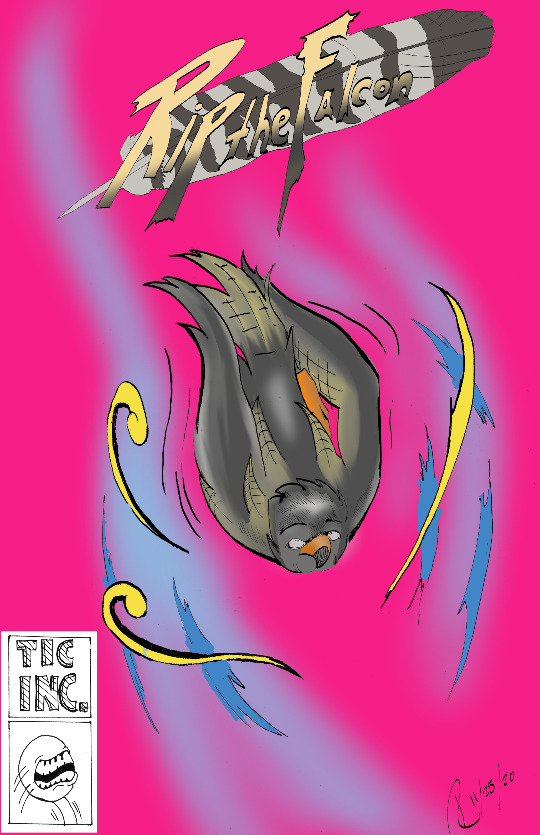 It is difficult to find anything worth watching these days, readers. Most of what is on air is mired in addressing everything save the story itself. Not only is it irritating, it is tiring. Viewers just want a little escape, something to unwind from a stressful day. Is that too much to ask?

TIC Studios thinks it is the right question to ask. Rip the Falcon follows a wandering loner in a world of anthropomorphic animals and monsters (not to mention demons). So far, the series has one 40-page online comic and two short videos. Each episode has content that is rather mature, though I would not call it gory. Seeing heads crushed is probably not something the little ones need to watch, though.

The series satisfies a multitude of desires. Rip fills the wandering Loner Trope quite ably, dealing out justice with his enormous, razor-sharp talons as he “search[es] through the reach.” What he is searching for has yet to be revealed, and that mystery helps make him interesting. It leaves room not only for development of the character, but allows his past to be explored and the destination to which he is heading to be revealed.

The artwork for the series is loose but that makes it simpler to animate and produce. Rip’s over-sized talons emphasize that he is a falcon of action who is more than willing to fight – particularly when he sees the innocent being abused. Half wandering gunman, half masterless samurai, he is all fury and fire when the time to act comes.

I recommend starting with the comic and then moving on to the animated series, which is available for purchase on Amazon* or can be viewed on TIC’s YouTube channel. The comic follows Rip stopping at a village to rest, eat, and contemplate ceasing his wanderings. Then bandits show up, kidnap the women and children, and Rip flies to the rescue…

…only to get caught and beaten up badly. How he and the villagers get out of this mess is something you will have to read yourself, though. I won’t spoil the ending for this adventure, but I will say that I really enjoyed it. It was very satisfying!

The first animated episode of Rip’s adventures – “The Rose” – is standard but enjoyable Western fare that sees Rip looking for the basic necessities: food, a bath, and shelter. When he finds those who provided these things for him are less than honorable, however, his judgement is swift and deadly. It was a bit bloodier than the older Western series I used to watch, but the basic themes remain the same.

Aptly titled “Hotel California,” the second episode is deliciously creepy. In keeping with the theme of the song from which it takes its name, this installment has Rip facing his first truly demonic threat. When I think back to this episode, I have to remind myself not to do so when it is dark out or when I am not distracted by something chirpy. “Hotel California” is definitely eerie as Rip faces a spiritual menace in its own domain. This episode is perfect viewing for Halloween night.

I will be keeping an eye on this series going forward, as it is interesting and a great deal of fun. It has straightforward characterization and storytelling, and the voiceover work (as well as the music) are quite good. This is an adventure where I believe I will be along for the ride for quite some time to come.

Wow. It has been a while since I followed an animated series closely, readers. That is saying something!

Oh, before I forget, please remember to leave a review for Rip the Falcon on Amazon or comments and likes on the YouTube videos. Every creator loves feedback, and TIC Studios is working hard on this series. Your comments and reviews help by offering encouragement, so don’t withhold them! Let the creator know you liked the series!

Rip the Falcon | The Rose

If you liked this article, friend Caroline Furlong on Facebook or follow her here at www.carolinefurlong.wordpress.com. Her stories have been published in Cirsova’s Summer Special and Unbound III: Goodbye, Earth. She has also had stories published in the Planetary Anthology Series. Another story was released in Cirsova Magazine’s Summer Issue in 2020, and she had a story published in Storyhack Magazine’s 7th Issue, Cirsova Magazine’s 2021 Summer Issue, and another may be read over at Ember Journal. Her first anthology – The Guardian Cycle – is available in paperback and ebook as well. Order them today!

4 thoughts on “Review: Rip the Falcon Comic and Animated Series”