Part of me wanted to title this after Andre Norton’s tale Gryphon in Glory*. But my better sense prevailed – er, mostly. Click the link to learn more about this fascinating new discovery, readers! 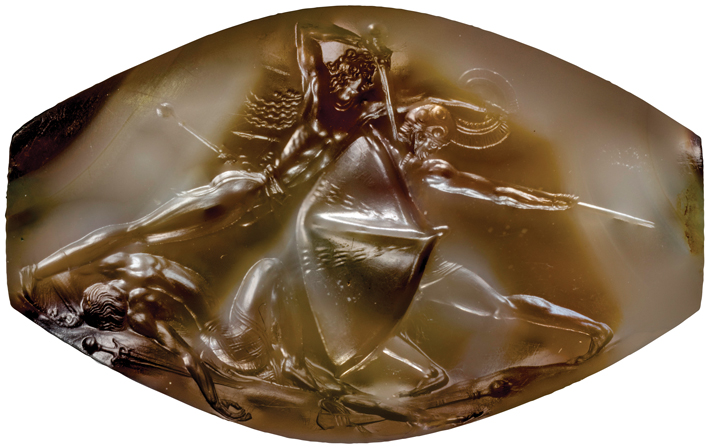 World of the Griffin Warrior

The Pylos Combat Agate, found in the Griffin Warrior’s grave, is an extraordinarily fine seal stone measuring only 1.4 inches wide. It depicts the final moments of a battle among three warriors.

The age of Homer was an age of heroes—Agamemnon, the king of Mycenae, Odysseus, the king of Ithaca, and Nestor, the king of Pylos, among others—whose deeds are chronicled in the Iliad and the Odyssey. Many archaeologists believe that Homer’s tales, despite being composed 500 or more years after the Late Bronze Age events they describe, had roots in a real past. “There’s always a kernel of truth to stories handed down from generation to generation,” says archaeologist Jack Davis. Whether these men were real people is unknown. But the culture they belonged to, which dominated Bronze Age Greece from around 1600 until 1200 B.C.—known as Mycenaean since it was given that name by nineteenth-century scholars—was certainly the model for the poems’ dimly remembered heroes from the deep past.

Over the past century, archaeologists and linguists have largely focused their studies on the Mycenaeans’ place in the early development of later classical Greek civilization. Excavations at Pylos, and at sites all across mainland Greece, have provided a great deal of evidence of the Mycenaeans in their prime. This research has revealed that at their peak they were tied into a world that encompassed most of the eastern Mediterranean, including ancient Egypt, the city-states of the Near East, and the islands of the Mediterranean.

2 thoughts on “Griffin on the Rise?”