A friend sent me a video about the Wasp (see below) as she was presented in Avengers Earth’s Mightiest Heroes*, a popular and well-beloved animated series starring Marvel’s team of the same name. I found the video quite interesting not only because it listed several of the reasons why I like Janet van Dyne – a.k.a. the “willowy Wasp” as Stan Lee liked to call her – but also for pointing out that she has largely been forgotten by recent adaptations. As much as I enjoy the MCU’s Ant-Man* films, I do sincerely miss Janet’s presence in them.

The videographer states that one problem modern authors have with Janet is that early in her six-decade career in Marvel she appeared “irrational, [had] a short attention span, [and] she flirt[ed] relentlessly.” I have read several of the original comics and never once thought badly of Janet during the course of said reading. Since the videographer does not offer an example of her irrationality, I am left wondering what she did that comes off as specifically (or life-threateningly) foolish. Jan is not perfect in the original comics, of course, but she is quite level-headed in the ones I have read.

With regard to her short attention span, that is easily explained: she is a wealthy socialite, not a scientist. Once Hank Pym/Ant-Man and the other Avengers who know science begin to have discussions in technobabble, Jan naturally loses interest because she cannot keep up with it. It is not that she is stupid – Janet shows several times that she is quite clever and quick-witted, more than once demonstrating that she can learn how to use technology capably. She simply does not play in the same field as the men because it does not interest her, and so she is naturally left standing on the sidelines watching them hash out the scientific or technical problem of the day.

Hmm, I seem to have discovered why she bothers modern writers so much, haven’t I?

Another reason I think the original Wasp irritates present day authors is that she is a wealthy socialite whose specific noncombat or civilian talent is in the realm of fashioning clothing. Janet has always (to the best of my knowledge) designed her own costumes, occasionally doing the same for her friends and fellow Avengers. She has inherited a great deal of money, to be sure, but that does not mean she “does nothing” all day save laze about or spend cash like water.

Since her altruism is highlighted in the video, I will not go into that any further and will instead turn to her constant flirting. At no point in the early comics do Janet’s flirtations come across as her looking for a man besides Hank; in fact, if memory serves, she reserves most of her flirtations for him. One of the moments I remember best is when she says, “If I can get you [Hank Pym] to the nearest Justice of the Peace, watch out!” 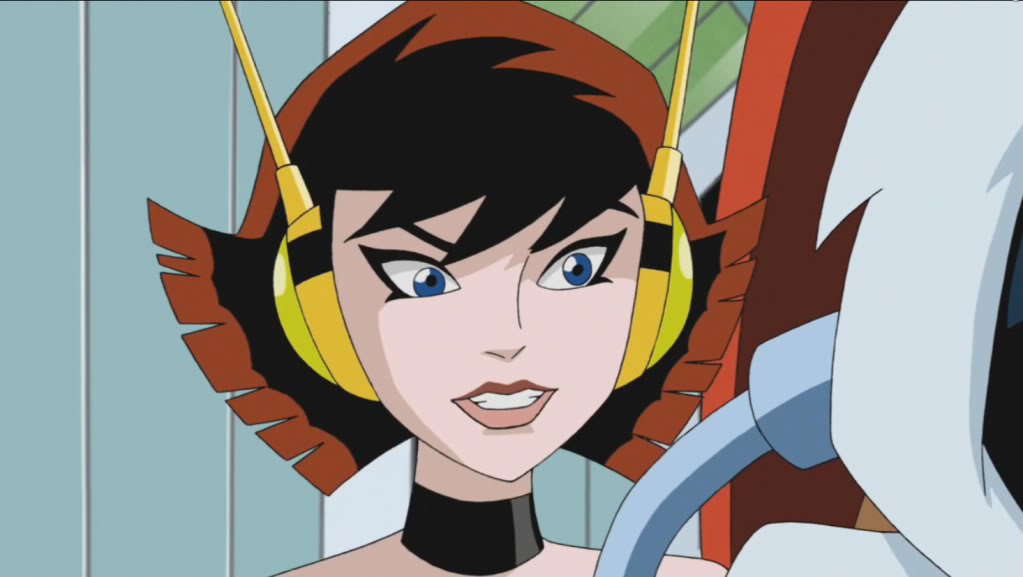 None of her male compatriots take her flirtatious comments toward them seriously, either. Her “flirting” with Iron Man or Thor amounts to nothing more than playful compliments meant to tell them, “I’ve found my man, but don’t give up hope, you’re more than attractive enough to snare a good lady! Just you wait, you’ll find her.” In other words, she is reminding them that they are all good men who will someday be lucky enough to find the woman with whom they will be happy for the rest of their lives.

The animated Avengers: Earth’s Mightiest Heroes did a good job, as the videographer points out, of maintaining Janet’s personality when presenting her to modern audiences. Although the series makes certain concessions to the modern age, it is a very faithful rendition of the character nonetheless. Along with this YouTube critic, I have to agree that you will be hard-pressed to find a better depiction of Janet van Dyne in current Western media.

Before I go to the next video, it bears mentioning that Janet’s original characterization is largely based upon the depiction of Nora Charles from The Thin Man, both the film* and the novel*. Nora’s loving relationship with her husband, Nick, had much the same character as Hank and Janet’s romance. The difference was that superpowers, aliens, and magic were involved in the comics, whilst The Thin Man’s focus was a murder mystery. Like any modern film and novel, The Thin Man inspired a multitude of homages and imitations because it was a huge hit. Everyone liked it, so numerous writers picked up the trope and began using it because it was popular and they knew it would be a success – IF they did it right.

Janet and Hank’s relationship is one of the longest-lasting homages to The Thin Man. It is a shame to see it cast aside, as is being done now. There is life and joy there, and it is too bad more writers are not interested in seeing if they can replicate the formula properly.

While I have very, very few problems with Thor’s depiction pre-Ragnarok in the MCU, the fact is that Earth’s Mightiest Heroes remains a more accurate depiction of the original character than the films. The MCU drew a great deal of its aesthetic qualities from the Ultimate Comics, which were begun to reboot the characters for a new generation AND to get Hollywood’s attention. Since the modern entertainment complex cannot conceive of a Savior, they are woefully unprepared to raise their minds even as high as the ancient pagans did to fathom their gods. This means their depiction of any religion or deity is thinner than a bit of engine oil floating in a small puddle of rainwater.

In short, since they will not countenance an omnipotent, loving God, the idea of gods period offends them. Modern attempts to write the gods of old fall flat for this reason. No matter how I look at it, I can see no other explanation for the lackluster management of the god of thunder in Thor: Ragnarok and subsequent animated series than that the writers have no understanding of deities at all. 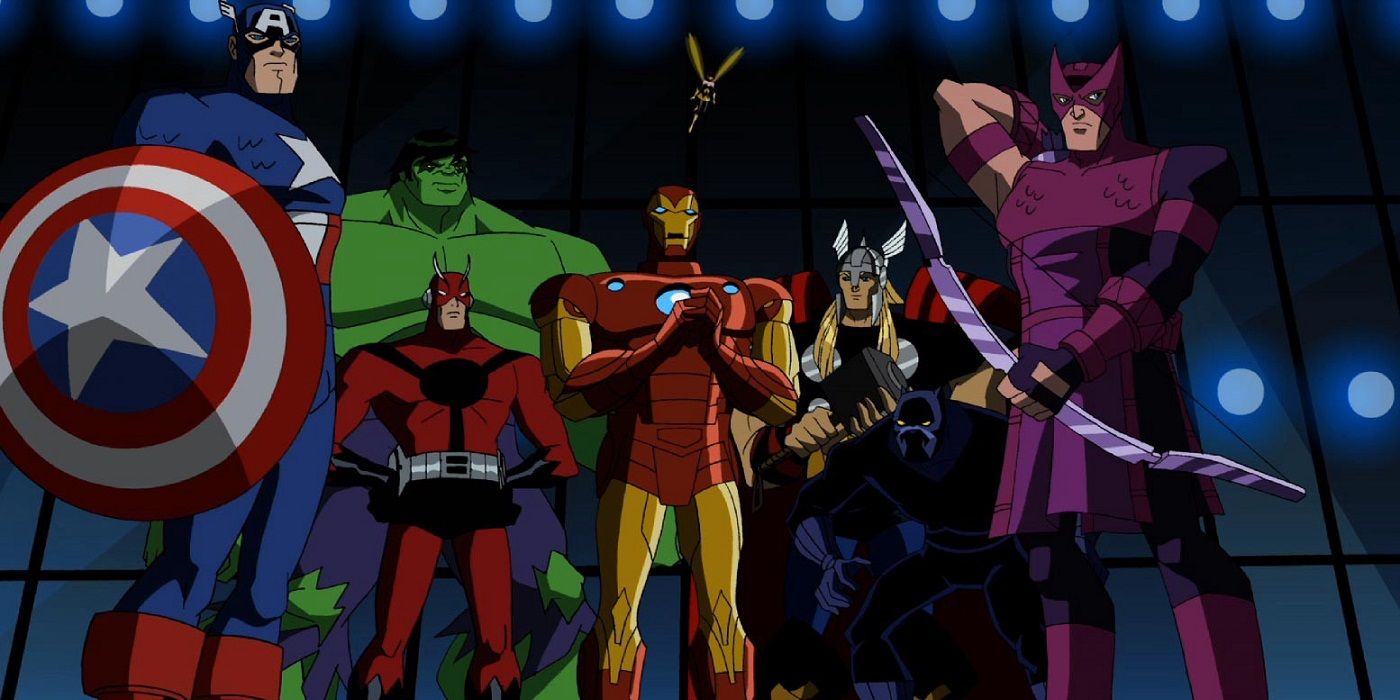 While EMH did not perfect Thor in my opinion, it neither “nerfed” him (i.e. unnecessarily restrained him during a conflict or removed him from battle), nor treated him as Dumb Muscle too stupid to do anything other than flatten an obstacle the rest of the cast cannot move. Using that trope for Thor is far more egregious, to my mind, than gratuitously restricting his movements or leaving him with little to do in the course of the story. Treating him as Dumb Muscle leads to flagrant destruction of his character and archetype, as we have seen in cinema lately, and that is an erroneous path for a writer to take.

“Nerfing” a character or struggling to give him something adequate to do in the fight, on the other hand, can be due to either a lack of skill or inability of the author to manage said character type. One of the criticisms of Avengers: Age of Ultron* which I have heard is that Joss Whedon seemed to be at a loss as to what to do with Thor for most of the film. I have a certain fondness for Age of Ultron many others do not, and in addition, a certain amount of fan knowledge based on research of the comics, as well as expectations built up from various animated features. So I do not think Thor was terribly ill-used in the film.

That being said, for all his storytelling prowess, Whedon is a self-admitted atheist. Thus, writing any divine being may be difficult for him. From what I have seen, a number of atheists often assume that “gods can do anything, so there’s no way to really limit them.” There are, in fact, several ways in which the classical gods of antiquity could be “nerfed.” Unfortunately, the atheist’s adolescent focus on the omnipotence of the Christian God means said atheist may not stop to consider that the ancient pagan gods were not omnipotent. Many seem to assume all deities are the same (hint, they are not), and this attitude would make writing any type of god properly very difficult indeed.

I do think that Whedon did a good job with Thor in Age of Ultron – certainly better than Waititi did in Ragnarok, and well enough that he did not destroy the prince of thunder’s previous characterization. But even so, there is cause to believe that he could have done better. I can only say in Whedon’s defense that it is likely easier for him to think of ways for the god of thunder to fight giant flying eels than it is for him to consider methods he could use to destroy Ultron’s drones.

The Leviathans in The Avengers* are something no human could defeat alone. Only the Hulk could face one without taking mortal damage, as even Tony Stark rather narrowly survives his Jonah gambit. Throwing Thor at armored space monsters also requires less visual explanation than “Thor is fighting on a flying city filled with robots, with civilians everywhere, so he really can’t afford to use his full power in this situation because X, Y, and Z factors make it Very Tricky for him to avoid killing the people he is trying to save in the process.”

Ultimately, I think that is my take away from the MCU’s and Marvel’s recent inability to write gods of myth in any meaningful capacity. Once a writer stops countenancing even the possibility that the Divine exists, they cannot dream of a divine at the level our ancient forebears conceived and perceived. Whedon, for all his faults, is far more honest about that than many others in Hollywood – which means he writes the characters in keeping with who they are, even when he personally disagrees with them. Most of Hollywood these days cannot do that, and/or is actively trying to prove they are better than such things. These factors all combine to make Earth’s Mightiest Heroes an even better series to study or just to watch for pleasure, since it avoids both traps completely.

Enjoy the videos, readers. Oh, and if you have not already taken the time to watch EMH, please consider doing so. It truly is a good series and it is well worth the investment. You can learn a lot from a good tale well told – whether you are interested in the craft of writing or not!

And now, fare thee well! I am off to work again. See you later!

If you liked this article, friend Caroline Furlong on Facebook or follow her here at www.carolinefurlong.wordpress.com. Her stories have been published in Cirsova’s Summer Special and Unbound III: Goodbye, Earth. She has also had stories published in the Planetary Anthology Series. Another story was released in Cirsova Magazine’s Summer Issue in 2020, and she had a story published in Storyhack Magazine’s 7th Issue, Cirsova Magazine’s 2021 Summer Issue, and another may be read over at Ember Journal. Her first anthology in The Guardian Cycle is available in paperback and ebook as well. Order them today!

4 thoughts on “Avengers – Assemble! A Look Back at Earth’s Mightiest Heroes”