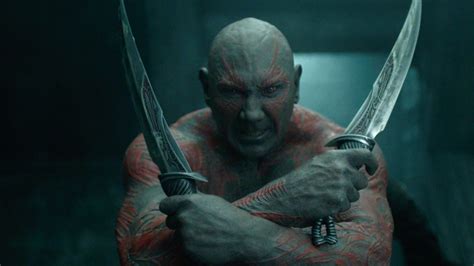 Everyone remembers that moment in Avengers: Infinity War when Drax thinks that by moving slowly, he can remain unseen. That is, actually, a tactic that can be used to avoid being remembered or noticed by people who are distracted. It is hardly a hundred percent effective in every situation and place, but it can and has been done. Move slowly or stand still while, and you will be overlooked because you are not moving and, therefore, not attention-worthy.

The video below offers insights into another aspect of avoiding attention: act normal. Natasha Romanoff uses this point to great effect in The Winter Soldier* where she tells Steve Rogers to put one arm around her and “laugh at something [she] said.” By blending in the right way, you do not attract attention. Ergo, with others looking elsewhere, you can go your merry way and never be recognized.

In point of fact, this is why HYDRA’s later attempts to kill Steve, Natasha, and Sam Wilson attract so much attention. The attempted assassination of Nick Fury is also notable: such public attempts to murder are extremely uncommon in the West. They do happen elsewhere in the world, but typically not in the United States or a number of other first world countries.

That rather shows how certain HYDRA was of taking control of SHIELD and the rest of the world. Why hide when you are going to win, anyway? This will be the new normal. Your new subjects ought to become accustomed to the threat of and the violence inherent in the new regime you are setting up.

All that being said, how realistic is the video and choreographed fight scene below? Here we have two men fighting to assassinate one another in broad daylight in a park. Both carry knives and they pass by or allow other pedestrians to pass them during the fight. Somehow, no one notices the two men desperately trying to kill one another.

It’s absurd. That would never happen in real life!

That’s the key question, isn’t it? Everyone the two fighters in the video pass are distracted. They’re looking at their phones, have their headphones in, and are focused on themselves. On their own goals, their own lives, their own specific needs in this particular moment. They therefore never see nor really notice what the other people beside them are doing – including the two killers attempting to carve each other up in their very midst.

One person does note something strange. But since this person is in the middle of an outdoor class, the attention to detail is split. Thus, this person also misses the obvious, despite coming closer than anyone else to realizing that something is wrong.

From a writing perspective, this scene teaches storytellers a great deal. People miss much in the world going on around them because they are naturally inclined to and often must pay a great deal of attention to their own lives. It means they miss things, things which may be obvious if they were more observant or had reason to be wary.

Even well-trained operatives can overlook or miss people: in Captain America: Civil War*, Natasha hears European sirens over the phone when talking to Steve after the bombing of the Accords. But while she does try to scan the area to find him, he is positioned in such a way that she cannot see him easily despite knowing he is nearby. He and Sam also blend in well enough that, if Sharon Carter didn’t know how they were dressed and where they were waiting for her, she might have missed them.

Remember these things not only for your writing but for your everyday life. What do you miss because you are trying to get to work on time, worried about your own issues, et cetera? Your own life matters, and your problems are, of course, worthy of attention.

But we live in a world where danger can strike either ourselves or others at any time. If we do not keep our eyes open to that fact, we put ourselves at unnecessary risk. Predators do not hunt alert prey – they hunt prey that feels safe and, therefore, lets its guard down.

Don’t let your characters forget this rule unless they have good reason to, or because they have never been in a life-or-death situation before. For your own sake and safety, keep it in mind for yourself, too. Otherwise, you might end up in the same position as one of the assassins in the video below.