It is a crime I never got to this novel sooner, readers. This is a good mystery that keeps you guessing throughout, and the finale is so clever that in hindsight, a reader will wonder how he missed all the pertinent clues. Most of that is due to the fact that the subplots are introduced and revealed in a descending order that makes figuring out whodunnit harder and harder the further one progresses in the story.

Although I intended to read this book in sections, my brain had other ideas. When I went to pick up where I left off I became so engrossed I spent the entire afternoon reading The Ten Commandments of Murder.* Told from the first person point of view, the story follows a young man up to his neck in trouble. Here is the description for the novel: 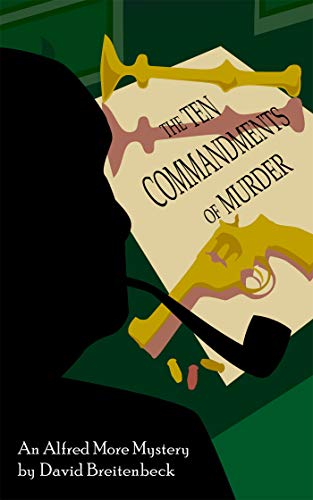 A gunshot shatters the night in the Long Island mansion of Wareham. An odious houseguest has been murdered and rich, directionless Alfred More is found holding the weapon that killed him…only he didn’t do it.

With a charge of murder staring him in the face, Alfred turns to the top private detective in New York: the huge, unpretentious Malachi Burke. Armed with his own ‘Ten Commandments of Murder’, Burke sets about sifting through the secret sins of the household to find which among them has violated the command, ‘Thou Shalt Not Kill.’

This cozy mystery is perfect for any lazy afternoon, readers. The first two chapters introduce us to the cast through Alfred More’s eyes and teach us about the principal players, setting up what will follow. It all starts on Easter morning as Alfred, his nephew, and his older half-brother, Jonathan, head home from church to host the expected Easter tide party. Something of an American version of Ebenezer Scrooge, Jonathan is the heir to his and Alfred’s father’s railroad company. He runs a tight ship but has a bad habit of letting work eat all his time.

His son Charles, Alfred’s nephew, acts the part of the lazy, flippant socialite. Most of this is to annoy his father, who has no time for him – or anyone else in the family, it seems. Charles and Alfred usually get along because they are nearly the same age (Jonathan is twenty years older than Alfred), but sometimes Charles likes to tweak his uncle. The knowledge that an old crush of Alfred’s will be attending the Easter party is all he needs to needle him, leading Alfred to rather wish he wouldn’t bring that up.

Our hero’s crush is named Violet Gale. She is married to one Nathan Gale, an absolutely horrible man who, while he doesn’t physically mistreat Violet, clearly does not care about her. In fact, during the dinner party he outright insults her. When Alfred comes to her defense Gale laughs at him and tells the other man that he doesn’t know Violet near as well as he thinks he does.

Infuriated, the young man makes a predictable error. Without thinking, Alfred proclaims: “If there were any justice in the world, you’d be murdered in your bed tonight!” This is the absolute worst thing to say in a murder mystery. Of course, Alfred does not know that he is in a murder mystery yet. All he does know is that he has made a spectacle at the party, given his enemy an advantage, and that he needs to cool off.

Thankfully, as any sensible man would do, he heads to his room to relax and get over his temper. It takes time but eventually he is calm enough to settle in and go to sleep. Hours later, however, he is awakened from a dream by a sharp sound that can only be a gunshot. Getting out of bed at once, he goes to investigate.

Since the sound seemed to come from Gale’s room and the man’s door is open, Alfred enters for a closer look. Lifting his candle high he sees that Gale is lying flat on his back, a hole in his temple and a pool of blood spreading across pillow and sheets. Stumbling back in shock Alfred’s foot hits something and he looks down, then reaches for the item and picks it up. It is, naturally, a pistol and the murder weapon.

At this point, yours truly was trying not to pound her head on the wall as she silently screamed, “No, no, no, no, don’t touch…! Augh!!” Shock does weird things to a person’s mind, so I cannot hold it against Alfred. Nonetheless, I have not had the impulse to smack my head on the nearest hard surface at a character’s avoidable mistake in years. The fact that this scene elicited that reaction from me is a testament to the author’s skill at crafting a good scene, as it means I was invested in what Alfred did and what happened to him.

No sooner does our hero pick up the gun than Jonathan enters the room to find his younger brother holding a pistol at the foot of a dead man’s bed. Things look bad straight from the start here. They get worse, though the detective in charge of the investigation believes he is innocent, as appearances do not help matters at all.

But the detective is not your average police officer. He gives Alfred a name and address to hire a private detective for help. That would be none other than Malachi Burke, a huge Irishman and former police detective who has entered private practice. A mixture of Hercule Poirot* and Nero Wolfe, with the added spice of Sherlock Holmes and to my mind at least a little Perry Mason*, he takes the case and insists Alfred shadow him in the process. After all, it doesn’t behoove a man not to make sure his money is being spent well, does it? Particularly since the man in question has his future and possibly his life on the line.

The Ten Commandments of Murder is a great mystery in the vein of Agatha Christie but with a sharp dash of old-fashioned Celtic rough-and-tumble ferocity. Although Malachi Burke does not engage in fisticuffs, I would be hard-pressed to bet against him if he had to do so. His determined search for the truth combines with his fighting Gaelic blood to make him a formidable force so that, even though he does not lift a hand against anyone, you instinctively realize that crossing him is a bad idea.

I personally liked all the characters in this adventure, to the point I was worried a couple of times that one or more of the sympathetic suspects might be revealed to be the killer. Like any good murder mystery, we learn more about the people involved the longer we spend time with them, since they each have to be interrogated repeatedly. As Mr. Burke points out, everyone lies. It’s just a matter of finding out what they are trying to hide. 😉

All in all, this is a solid, fun cozy mystery anyone should be proud to have on their shelf. You can purchase it as an ebook or paperback* and see for yourself just what I mean. Far from modern crime dramas that tend to take a viewer or reader deeper and deeper into darkness, The Ten Commandments of Murder takes you from the shadow of evil into the bright light of dawn. I highly and heartily recommend the book to mystery lovers everywhere and anyone who wants something to cheer themselves up.

Don’t wait, pick up The Ten Commandments of Murder today!

One thought on “Review: The Ten Commandments of Murder by David Breitenbeck”