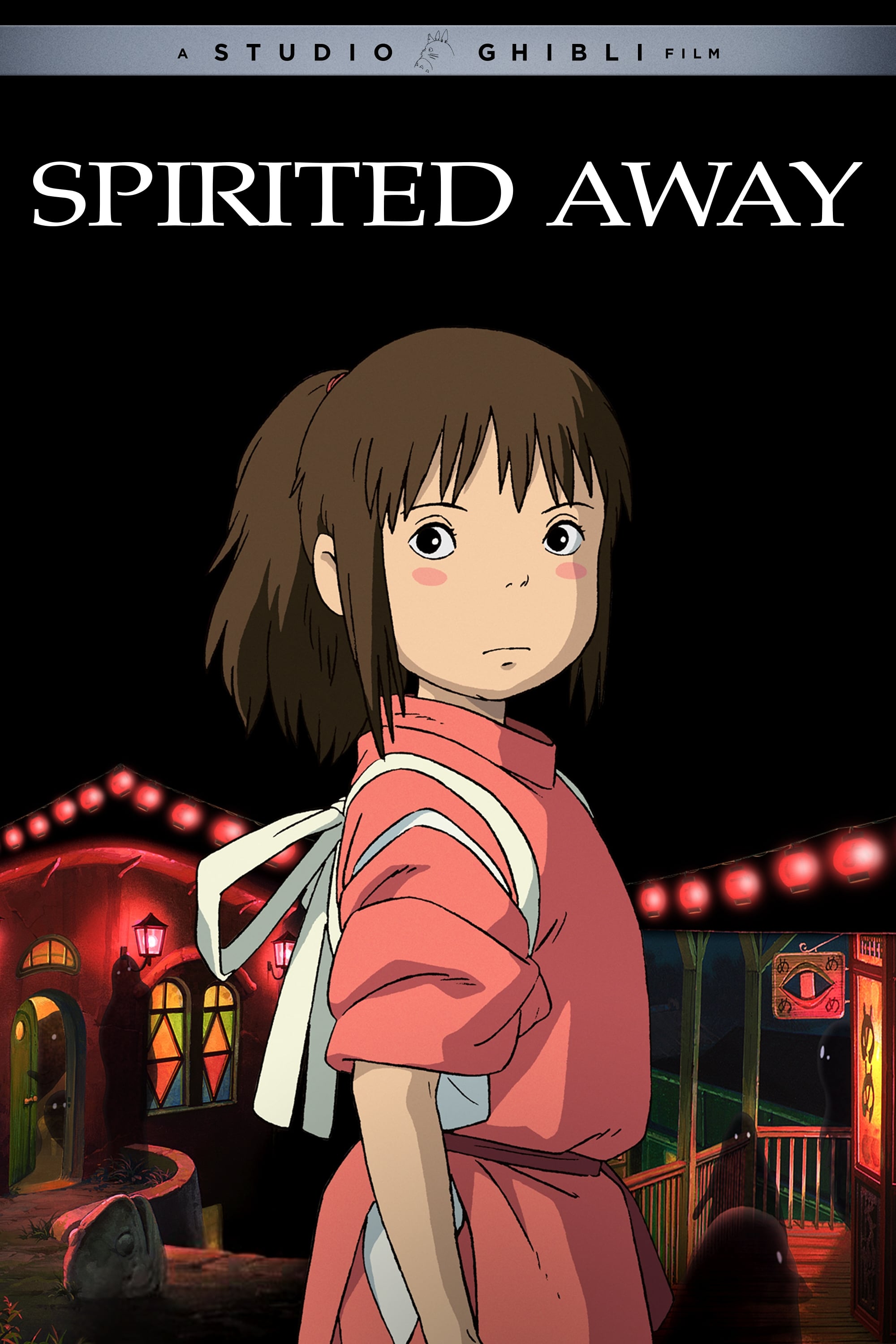 Having recently seen Hayao Miyazaki’s fantastic Spirited Away* again, I was struck by something I had not noticed before. It is a minor detail, one the story takes for granted, and so it is easy to miss. This is especially the case in a day and age where the fairy tale has largely been either sanitized to within an inch of its life or ignored and tossed aside altogether.

Before going on with Spirited Away, it would be good to refresh our memory of what a fairy tale entails. First, a proper fairy tale has rules which the characters must live by if they want to get through the story alive and in one piece. Violate these rules and the denizens of Faerie – whether they are witch, warlock, Fair Folk, or monster – will eat you. Or curse you, or turn you into pigs, or otherwise find a way to harm you. This is not even counting the love stories where the mortal man is taken to fairyland to live with his fairy wife, only to yearn for the mortal world. Before he sets out he is told he cannot step down from his horse or get out of his boat on this permitted visit if he hopes to return to his wife.

In these cases, violating the prohibition ends with the man finding the few years he has been in Faerie translate to either a hundred or three hundred in the human world. Everything he knew has vanished with the passage of time, his family and friends are long dead, and nothing is as it was. Should he fail to heed the warning – and he usually does – he will find he cannot return to Faerie. More often than not, he also ages rapidly and dies. The mortal and Faerie worlds are incompatible; spend too long in the latter world, and you cannot return to the human one.

Truthfully, it is hard to synthesize the “rules” of Faerie into specifics. Jim Butcher does a good job of it in his Dresden Files* series by pointing out that a) the Fair Folk never lie, they let humans fool themselves; (b) the residents of Faerie abide by contracts to the letter not the spirit, so make sure the deal is worded correctly, and (c) a good heart and respect for the code of hospitality will keep a person safe in the realm of Faerie – or at least make it difficult for the denizens thereof to find an excuse to eat the intruding human on the spot. Finally, and most important, the last rule is this: do not offer more information than is required. 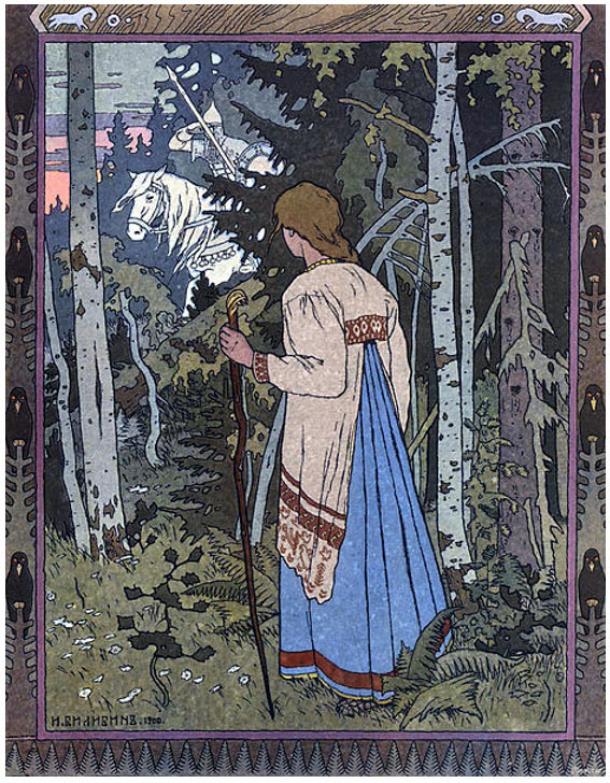 Watching Spirited Away, I was reminded of a tale from Russian Fairy Tales: Illustrated by Ivan Bilibin (Everyman’s Library Children’s Classics Series)*, which I have reread on and off over the years. Specifically, Spirited Away reminds me of the Cinderella-style story “Vassilissa the Beautiful and the Witch Baba Yaga.”

No, Baba Yaga wasn’t just a gag for Ant-Man and the Wasp*. She’s a common, deadly Faerie foe in Russian folklore. While some variations are helpful or at least not immediately antagonistic, most are quite ready and willing to seize an adult human walking up to their house and cook them for dinner.

In “Vassilissa the Beautiful,” the titular character’s envious stepsisters and stepmother conspire to have her eaten by Baba Yaga. They put out all the fire in the house and tell Vassilissa to acquire some from the witch. Unknown to her family, Vassilissa’s birth mother gave her a special doll with her blessing before she died. Said doll has helped Vassilissa with the unpleasant tasks set for her by her stepmother and sisters, and it is poised to do so again.

At the Baba Yaga’s house, the old witch smells Vassilissa and calls her forth. When the girl explains her errand, Baba Yaga says she’ll allow her to borrow some fire on one condition: Vassilissa has to do some work for her. If she doesn’t, Baba Yaga will eat her.

Vassilissa ends up making the old hag dinner for three nights in a row with the impossible tasks the witch gives her being completed by the doll. After the final dinner, Vassilissa asks the witch three questions, whereupon Baba Yaga demands, “Ask me more.” Remembering an earlier warning from the witch, however, Vassilissa remains silent. When pressed she repeats the warning, so Baba Yaga tells her what would have happened if she had asked about anything in the house before retaliating with a question of her own: “How did you manage to do all the tasks I set for you? Come on, out with it!”

The story says at this point: “Vassilissa was so terrified at the savage way the witch ground her teeth that she was on the point of telling her about the doll, but she stopped herself just in time and answered: ‘The blessing of my dead mother helps me.’” Hearing this, Baba Yaga flies into a rage, declaring that “No one who bears a blessing can live in this house! Be off with you!” Vassilissa doesn’t need telling twice, and though she gets the fire, it does not end well for her stepmother and stepsisters. 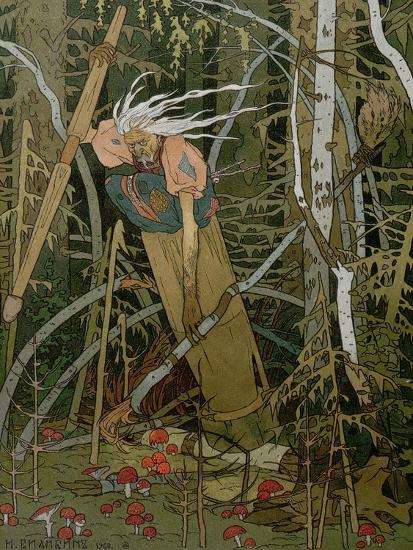 Baba Yaga in her pestle and mortar, sweeping away her tracks behind her.

Seeing Spirited Away again reminded me of this story. Chihiro does not appear, at first, to be the good-hearted, generous girl we see as the film unfolds. To be perfectly blunt, at the beginning she seems like a whiny brat. Her parents aren’t much better, but when they decide to investigate the “old amusement park,” the audience absolutely agrees with Chihiro about it being creepy. The fact that her parents think it is okay to just sit down and begin eating is also disturbing, and it is a relief when Chihiro does not follow their example.

Once she meets Haku, Chihiro begins to shine as a protagonist in both the modern and fairy tale sense. Rather than stand by and ask questions, when Haku insists she leave and shoves her away, she accepts that there is danger present and runs. Her discovery that her parents have become pigs and that she cannot leave the “park” crawling with yokai or Japanese spirits (many of whom are equivalent to some degree to European Fair Folk), she understandably panics. She tries to hide, to make herself wake up, but when that doesn’t work and Haku provides her protection she accepts it.

Aside from the panic and her early, bratty behavior, Chihiro’s acceptance of Haku’s help are hallmarks of a fairy tale heroine. The parallels continue to strengthen as the movie progresses, with Haku telling Chihiro not to take a breath as they cross the bridge, since this will reveal her to the other spirits. When she is startled into breathing, he acts quickly to keep her safe and she apologizes afterward – a mark of good manners and good breeding which all Fair Folk appreciate.

The most telling part of the fairy tale parallel comes when Haku instructs Chihiro to ask Kamaji for a job and that she is to insist on it no matter how many times he turns her away. Following the rules outlined above, Chihiro never tells Kamaji who sent her to him. He does not ask, but the fact she volunteers nothing is important. Her generosity in helping a struggling soot sprite when she didn’t need to impresses Kamaji but he still berates her for trying to find work in the boiler room with him.

It is a test. Will Chihiro continue insisting on a job, or will she buckle and break the rules, proving her heart less than pure? Passing the test, Kamaji sends the girl to Yubaba – the witch who runs the bath house and whose name is suspiciously reminiscent in English of Baba Yaga – to ask for a job.

Like the Baba Yaga in “Vassilissa the Beautiful,” Yubaba does her best to threaten Chihiro into breaking the rules. She berates her, tells her she’s worthless and a poor worker, then insists Chihiro tell her who ordered her to ask for a job. Again, the idea is to make the girl prove herself as false and impure of heart as her parents. If Yubaba does give her a job the contract will prevent her from harming Chihiro and her parents. That is why Haku told her to seek a job at the bath house; under contract, the spirits cannot hurt Chihiro unless she breaks the rules. If she lies, complains, steals, or blabs secrets then the contract is violated and the spirits can do whatever they want to her.

We see this pattern repeat throughout the movie. Zeniba warns Chihiro not to tell anyone that she changed Yubaba’s son into a mouse or she will tear out her mouth. Chihiro, in her desperation, nearly does tell Yubaba the mouse’s identity but catches herself at the last minute. Instead, she asks the witch, “You don’t recognize him?” She leaves Yubaba to make the mistake and holds her tongue, avoiding breaking the (implicit) contract with Zeniba by the skin of her teeth. 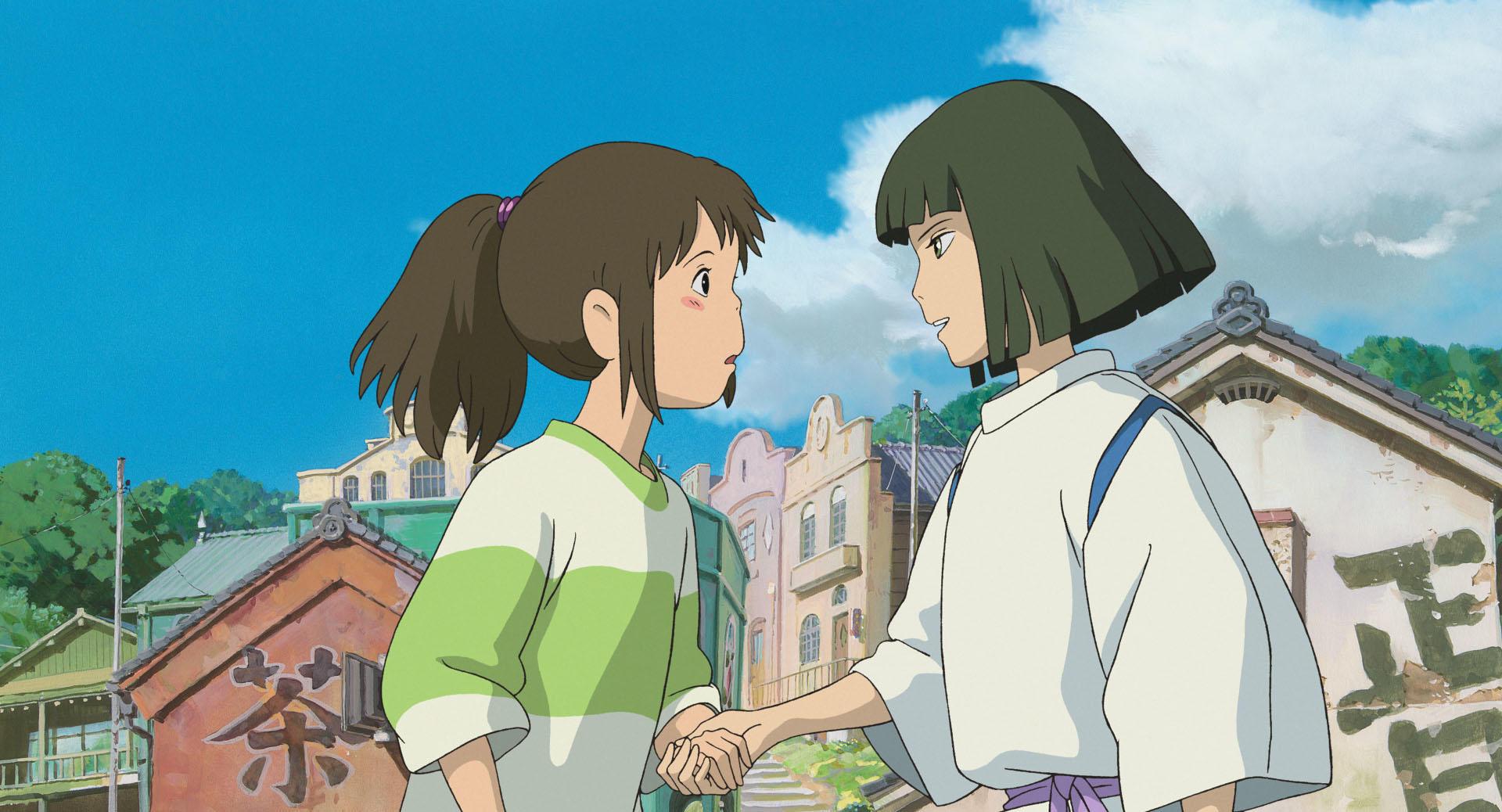 Finally, when Chihiro is leaving the spirit world Haku specifically tells her not to look back. At one point, however, she starts to do so. Only the magical hairband woven by her friends in Zeniba’s cottage saves her, reminding her of the rule and preventing her from breaking it. The film then ends on a classic fairy tale note, showing that months have passed in the real world when only days passed in the spirit world. Chihiro and her parents are free of Faerie but have all been changed by it – and only the daughter remembers enough to wonder if it was all a dream or not.

Throughout the film, neither the yokai nor Chihiro ever lie: they let one another blind themselves by making erroneous assumptions. The spirits, even cunning Yubaba, abide by their contracts to the letter. When Haku strikes a deal with the witch for Chihiro and her parents’ safe release, he is very specific about the terms, as is Yubaba herself. Chihiro’s good heart and respect for the code of hospitality, as well as good manners, are what protect her from the start of her journey to the end of it. Most importantly, she NEVER offers more information than is required or demanded of her, even when her life is threatened.

If you are looking for a good way to “update” a fairy tale, future authors, consider studying Spirited Away in more detail. Reading older fairy tales – Russian or otherwise – is a good idea, too. The rules across folklore are pretty standard but it is good to observe how they work in real time. A movie might be more helpful for you than a book, and vice versa.

Do not stop investigating. Keep poking, asking questions, and experimenting with the formula. Who knows? Maybe the next Spirited Away discussed and studied by writers will be yours. 😉