Finally, I hear you say, another review! As I mentioned previously, readers, those are coming slowly but they are coming. I’m a bit busy with my own projects at the moment, which is part of the reason for the delay.

More will be said about that another day, however. For now, let us dive into this review of Yakov Merkin’s excellent isekai-style Light Unto Another World, Vol. 1, the first book in the series: 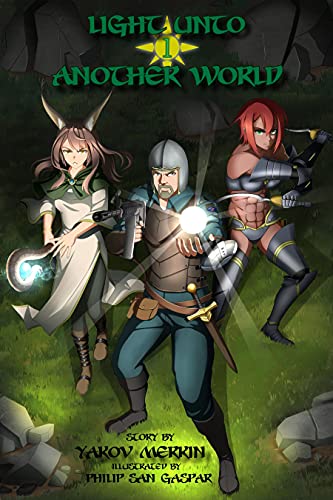 Soldiers are trained to improvise, to prepare for the unexpected.

However, there are some things you just cannot prepare yourself for.

Such as getting pulled through a portal and into another world.

Uriel Makkis, a young soldier in the Israel Defense Forces, was on his way to base for just another week in his tank when something very unexpected happened.

A portal opened, pulling him into an unfamiliar world, with no one to be found.

Never one to succumb to panic, Uriel does the only thing he can do: push forward to figure out just what has happened to him.

Almost before he knows it, he finds himself entangled in an entirely new conflict, one that runs far deeper than he realizes.

With no way home, all Uriel can do is trust in God to point him on the right path, and fight to secure not just his own survival, but that of those he has quickly come to rely on and care about.

With the help of these trusted friends, he must find out precisely what is happening on this new world, and do what must be done. 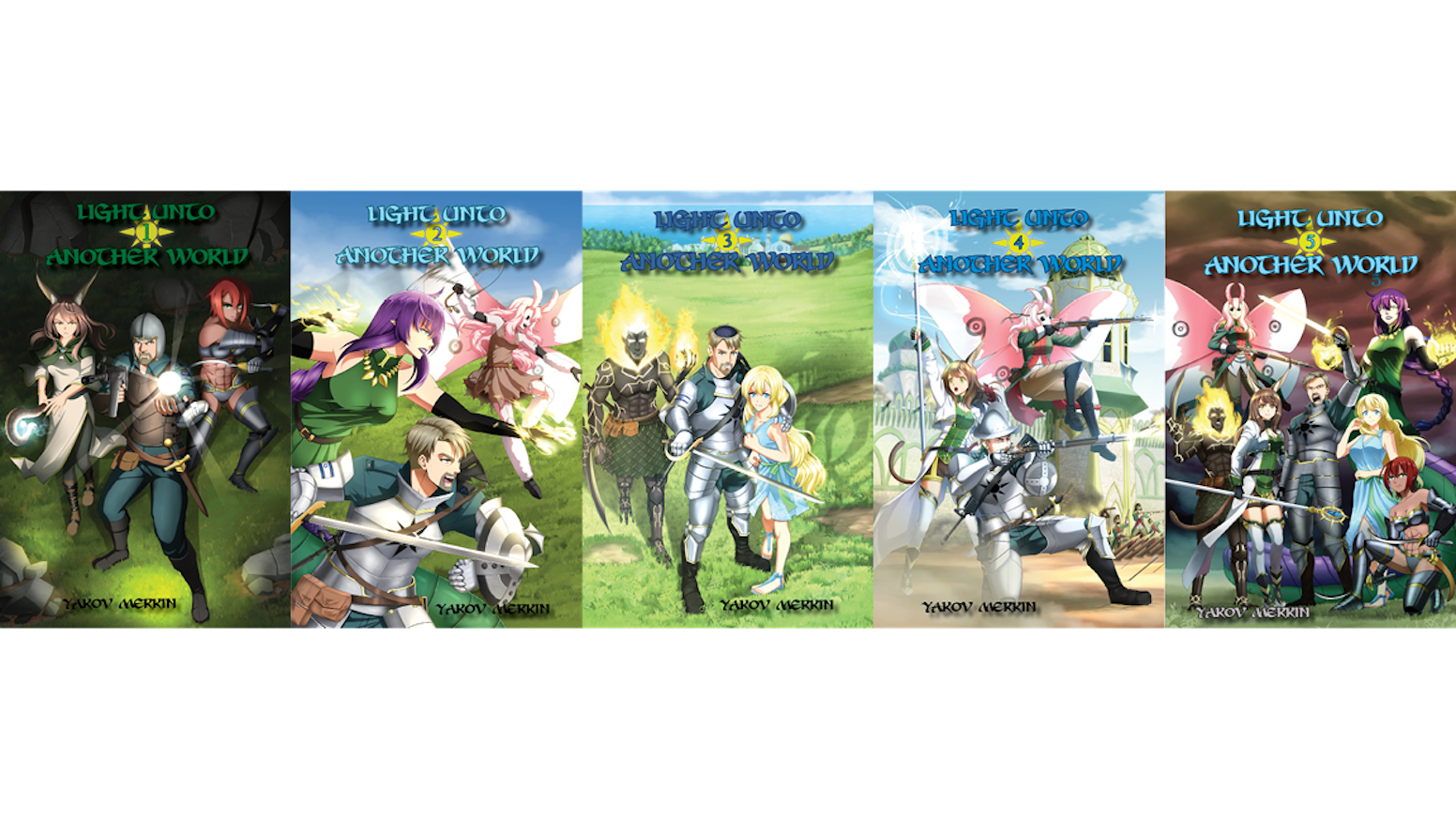 This is a very entertaining novel, one of the best books for the young reader market that I have read in a while. It is upbeat, bright with the promise of a good time, and not at all shy about the faith of its protagonist. Also, the illustrations are gorgeous – part of the reason I knew I wanted to read Light Unto Another World, Vol. 1* was the beautiful cover art. The interior illustrations made it much more appealing.

Uriel Makkis begins the story as he heads to base to join his tank crew in the field for two weeks of training. Born and raised in Pennsylvania, Uriel moved to Israel to serve in the army to help defend the country from her enemies. Sadly, though, politics keep interfering with his job and Uriel has found himself quite disappointed in the leadership of his country.

Nevertheless, two weeks of training with his tank crew is going to be fun. Having packed extra supplies just to be safe, he pauses to adjust the strap of his bag after speaking with a fellow soldier. In the process he is able to perceive a glowing oval of light appear in the air.

To his surprise, no one else seems to notice it; so Uriel steps forward for a closer look. Moments later, he is transported from Israel to a country of verdant fields and trees. Before he can do more than turn around, the portal that brought him to this strange place closes. When Uriel tries to lunge through it, a burning sensation on his palms causes him to look at them. He sees two marks engrave themselves on his hands. Once they are complete, the pain stops.

Stuck in a strange place with no signal for his phone and only the gear in his pack, Uriel avoids panicking and decides to investigate this new world. The portal is gone, so there is no point remaining at that place; no one will come find him. Better to move than to stand around waiting for things to happen.

He sets off, finding this new world is quite pleasant. In the process he decides to make a video diary so that if he cannot return home for some reason there will still be proof that he didn’t go AWOL and his family may learn his fate. The battery on his phone, though, needs to be charged and it only has so much memory. His videos will have to be short and he will have to keep his solar-powered charger where it can collect sunlight.

Pausing for lunch, Uriel finishes his meal in time for a female scream to interrupt the quiet. Grabbing his rifle, he charges toward the sound, finding two women being assailed by goblins. One woman is an elf wearing armor, while the other is a demi-human carrying a staff. The elf is injured and the demi-human accidentally trips, inviting the goblins in for the kill.

Uriel and his rifle quickly put an end to the monsters’ plans, leaving him with two new friends. He quickly learns that not only does magic exist in this world, but the demi-human – Kirala – is adept in its usage. The two thank Uriel for his help, only to notice the marks on his hands. Apparently, he is the Sword of Light, a hero summoned to help with a demon outbreak. Well, that explains why he was brought here.

Or does it? Before long, Uriel begins noticing certain things don’t add up. Unwilling to alienate Kirala and the other non-humans he meets, lest he be left up the creek without a paddle, he does not question them too closely. But the clues are there, and they all add up to a nasty surprise about his summoning. One which puts his arrival in this world in a new light entirely.

I truly enjoyed this book, readers. Uriel is a hero who, unlike many mainstream male protagonists of our time: he is resourceful, calm, and curious. He is almost always asking questions to learn more about the world in which he finds himself, while his ingenuity is a constant surprise and source of fun. Admittedly, I was hoping he would try to use his new powers to make lasers, but that might happen in later installments. He’s only been in his new position for a few (rather busy) days, after all. That kind of puts a crimp in one’s ability to innovate beyond a certain point!

Reading about Uriel’s faith and how it influences him was interesting as well. His Jewish faith added quite a bit of flavor to the story and the worldbuilding, making Light Unto Another World, Vol. 1 the most Biblically-inspired isekai (portal fantasy) adventure I have yet encountered. It was a refreshing and fun change of pace which made the book all the more entertaining. I look forward to seeing how these themes and the world itself further develop in the sequels I intend to purchase..

Kirala is a sweet character – and yes, this author can admit to a little shipping for her and Uriel. It doesn’t hurt that the demi-human is Uriel’s best friend in this new world and that she works well with him. Her own arc in this book along with her creativity and strength make her stand out from the average isekai heroine. The more we see of her in subsequent volumes, the happier I will be!

If you’re looking for a fun, light-filled and easy-to-read adventure, then look no further. Light Unto Another World, Vol. 1 is precisely what you are looking for but did not realize you wanted. The book ends on something of a cliffhanger, so be prepared to buy book two* when you finish. Any younger readers in their tweens or early teens will also enjoy this story, which is perfectly suited to entertain them. Uriel is a hero they will cheer on and learn from with ease, as he is both likeable and intelligent.

But don’t take my word for it. Purchase the book today and see for yourself just how good it is!

If you liked this article, friend Caroline Furlong on Facebook or follow her here at www.carolinefurlong.wordpress.com. Her stories have been published in Cirsova’s Summer Special and Unbound III: Goodbye, Earth, while her poetry appeared in Organic Ink, Vol. 2. She has also had stories published in Planetary Anthologies Luna, Uranus, and Sol. Another story was released in Cirsova Magazine’s Summer Issue in 2020, and she had a story published in Storyhack Magazine’s 7th Issue and Cirsova Magazine’s 2021 Summer Issue. Order them today!