Whew! I am finally making something akin to a dent in my TBR pile, readers! Today’s gem is a book by Karina Fabian, author of the DragonEye, PI* series and Space Traipse* books. She has also written the Neeta Lyffe* zombie apocalypse series and The Mind Over* trilogy, so she has a backlist you may wish to investigate. 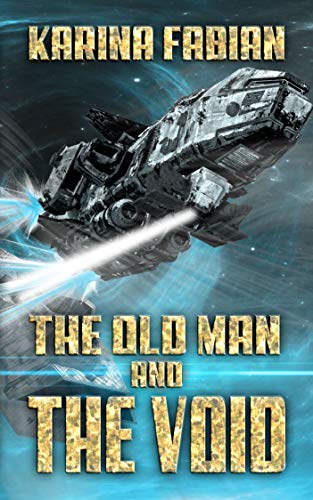 Dex Hollister hunts relics in the accretion disk of a black hole. Aging, impoverished, and suffering from a dry streak, he sets his sights on the biggest score of all: a battleship from a long-dead civilization. Dex makes the “catch,” but his prize powers up and pulls them both across the event horizon. In this no-man’s land of time and space, the automated ships of two ancient civilizations still fight their war. Trapped beyond the point of no return, Dex must use all his cunning to make his way back home.

Written in the tradition of Ernest Hemingway’s The Old Man and the Sea, this story pits man against the universe in a space opera setting.

The story feels like a marriage of Gene Roddenberry’s Andromeda*, Star Trek*, Firefly*, and quite possibly Stargate SG-1* as well. Remember all those fun time travel stories in most of these series? Or the times when the heroes had to nothing but spit, duct tape, and pluck to pull them through? Combine that with the fierce determination to capture a “big score” – in this case, an alien ship rather than an enormous fish – and you have The Old Man and the Void.

Dex Hollister begins the story dreaming of his wife, of the day he showed her the magnificent creatures native to the planet where he was born. Raised on a wildlife preserve on that world, in this memory Dex is showing Scarlet his favorite animals in the hopes of making sure she’s “the one.” When they get to the top of the mountain where the creatures reside, he watches her stare at the magnificent beasts in awe….

Then his ship’s AI, Santiago (yes, Mrs. Fabian went there), calls on him to wake up.

Part of the trouble with hunting alien relics in the accretion disk of a black hole is that it affects not only the human body but the mind as well. In this particular case, the disease is called Disk Activated Memory Disorder; the person afflicted loses track of when they are and who is with them. There are ways to slow it down but not to stop it, and eventually, it will kill Dex.

But not today – not when he has his biggest prize in sight. At some point in the past, this black hole was the site of an enormous battle between two alien races. Neither species, so far as anyone can tell, is extant at present. And if they are, mankind hasn’t encountered them yet.

Humanity has a space station nearby to study the black hole and the relics it contains, some of which occasionally win free of the gravitational whirlpool in which they are trapped. More often than not, however, these relics are brought out by hunters like Dex. These hunters brave the dangers of the black hole to snag damaged relics and bring them out of the gravitational distortions and into the present so they can be studied and reverse engineered.

Dex has helped to do that with smaller relics before, and today he intends to do it again. This time he is after an artifact much bigger than anything he has pursued previously. It is not a weapon drone, a device which can autonomously attack another vessel. He and his wife captured several drones over the years times while she lived. No, now Dex has an entire ship in his sights.

It is a big score, no doubt. Should they retrieve the ship, Dex and Santiago will have contributed significantly to mankind’s understanding of the aliens and their technology. Although he’s not hurting for cash, the monetary reimbursement for the vessel will be greatly appreciated, too. So capturing and towing the vessel out has many, many benefits to make it worth the risk of hunting it down.

But when Santiago snags the alien relic, the strange ship hits the gas, drawing them both deeper into the black hole. Anyone who has seen Andromeda or Stargate SG-1 remembers that time dilation is one of several dangers that make black holes interstellar hazards, and there is no exception here. If – when – Dex gets free of the black hole with his prize, he will find a very different galaxy on the other side.

Dex is a great character to ride along with. Stubborn, proud, and strong, the reader roots for him the whole way through the story. I found myself wincing and clenching my teeth a time or two, thinking that one or two near misses were far too close for comfort. For an elderly gentleman with a variation on Alzheimer’s, Dex sure gets around in this story!

Santiago, the AI for the ship of the same name, is a charming combination of Andromeda’s Romy and Tony Stark’s* acerbic AI, JARVIS. It takes work to make an artificial intelligence endearing, but Fabian accomplishes it very well. Part mother hen, part apprentice and all loyal friend, the times during the narrative when Santiago was knocked out of commission were nerve-wracking. He’s an AI; blow up the right circuits, and he’s dead. That means Dex will have to fight the black hole and the alien craft alone, which will not end well. 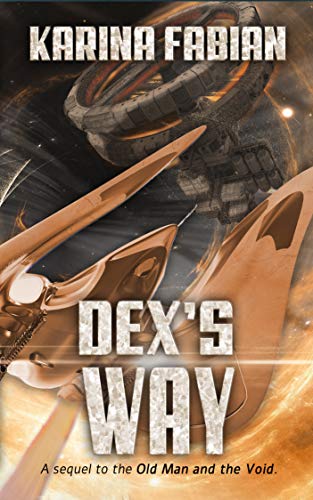 Luckily, Mrs. Fabian likes upbeat finales. Together, Santiago and Dex are a team one enjoys spending time with and whom one wants to see succeed. The end of the story is a bit of a cliffhanger, leaving one wondering what may happen next. When I have the chance, I intend to purchase Dex’s Way* – the sequel to The Old Man and the Void – to see how the duo’s story concludes.

Yes, readers, I liked this book so much I plan to read the second part. If you want to pick this novel and Dex’s Way up for Christmas, be sure to purchase it through one of the Amazon Affiliate links scattered throughout this post. Additionally, if you like my book reviews, remember to drop by Upstream Reviews where I have begun contributing articles on entertainment topics – including books like The Old Man and the Void.

Don’t wait, readers! Pick up The Old Man and the Void today. This is one science fiction adventure that deserves to be in as many libraries as possible! 😀