Sort of? It is an armadillo lizard, and it is cute. But it really is not much of a dragon. Not unless some scientists take their cue from Anne McCaffrey’s* series, Dragon Riders of Pern*, that is!

And before said scientists run off to their Labs of Doom, allow me to say (with an appropriate glare): “Don’t even think about it.” 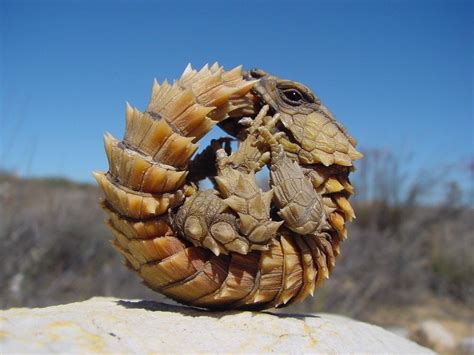 The Armadillo Lizard Is Like A Mini Armoured Dragon

Can a lizard be both cute and scary at the same time? In the case of the armadillo lizard, it probably is.

This little lizard is like a medieval fantasy dragon. One that is brought to life.

Obviously, it does not breathe fire. Also, it is a lot less fearsome than an actual dragon. Thus, it will not devour you like a jelly bean (we hope!).

The armadillo lizard is also one of the few reptiles that does not lay its eggs.

Furthermore, this may be one of the animals to inspire the appearance of dragons we see in fiction. It might have also inspired humans to consider armouring up during a time of war.

8 thoughts on “Enter the Dragon”