Given the example of the Cross, the answer is: Not hardly. Take a look at this article about a nun who “loved too much,” readers: 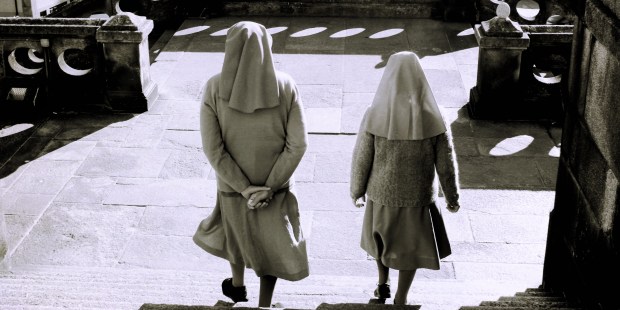 She was executed for loving too much: Meet Sr. Aguchita

She was killed in 1987 in the Amazon regions of Peru, determined to continue helping people of the Ashaninka tribe.

Maria Agustina Rivas Lopez was born on June 13, 1920, in Coracora, Peru. She was the oldest of 11 children born to Modesta Lopez de Rivera and Damaso Rivas. They gave their daughter the name of Antonia. Antonia and her siblings had loving and caring parents who taught their children the Catholic faith and its virtues.

Antonia developed a deep love for the poor and, as she grew older, always did her best to help and protect them. She loved harvest time because she could give the poor much more than usual. The country atmosphere was well suited to Antonia, as she loved nature with its abundance of plants and farm animals. She also liked helping her mom taking care of the house — no simple task with 13 people living under one roof.

Antonia’s mom did her best to take her children to Mass every day. It was not always possible, but she tried. Her children attended Catechism class in the parish. Her brother, Cesar, answered the call to become a priest, eventually being ordained a Redemptorist.

In 1938 Antonia was in Lima, visiting her brother, and was already feeling the call to service in the Church. It was during this time she had her first encounter with the Sisters of the Good Shepherd. Antonia began a vocational discernment with them, which ultimately led her to enter the Congregation  Antonia received her habit and, with it, a new name. From then on, she was known as Maria Agustina, but the sisters gave her the nickname Aguchita.