I know that I am overdue to post book reviews here, readers. The knowledge eats at me; I have several books on my TBR list about which I wish to write. And that list is growing by the day, so I had better start thinning the ranks!

Cirsova Publishing was kind enough to provide me with a review copy of The Paths of Cormanor*, by Jim Breyfogle.* I enjoyed it immensely. This author cannot recall the last time she had so much fun in a fairy tale setting that had a heavy dose of Germanic myth on the side, which only enhanced the story and the worldbuilding. From the back of the book: 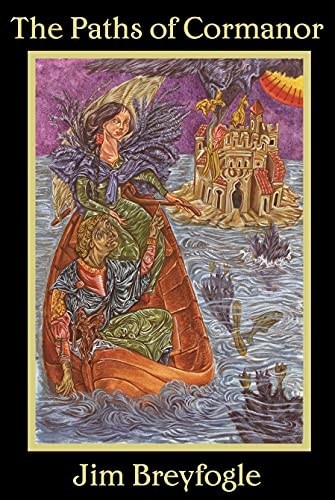 Amara is a young woman of Cormanor, a household whose womenfolk have the ability to transform into cormorants to fly and dive for fish. Kellen is the youngest prince of the realm, a seventh son of a seventh son, and wishes to see these remarkable women for himself.

During the pageantry upon the lake, Amara’s cousin falls into the water and is spirited away by the Grimly, a malign creature of the elder world! Kellen braves both water and monster to rescue the boy. However the Grimly manages to trap the prince’s soul and mark him for death! Amara tracks the Grimly to her lair, slays the wicked beast, and restores life to the young prince… but a piece of Kellen’s soul is trapped within Amara!

The death of the sinister Grimly is just the beginning—Kellen must find the means to recover his missing piece of soul, while Amara and her family are haunted by the vengeful offspring of the monster she had slain! Kellen and Amara each must undertake their own harrowing journey, meeting delightful friends and dastardly foes, along the Paths of Cormanor!

Jim Breyfogle’s beautiful new novel of fantastical romance is inspired by Eastern and Northern European myth and fairytale and sure to delight readers of all ages.

This book is a treasure, readers. If you liked The Swan Princess*, Beauty and the Beast*, and the ancient myths the Norsemen told, then you will enjoy this book. Far from being a rehash of any of these tales, The Paths of Cormanor is an absolutely beautiful homage to the pieces that inspired it. I daresay that Professor Tolkien* himself would have enjoyed this book!

Amara is the youngest daughter of Helen, the present head of the Cormanor household. Her grandmother is the matron of the family but she is too old now to fly or dive. When Amara comes down after preparing herself for the prince’s arrival, Grobmutti (Grandmother) calls her over and asks how she is feeling. Confused, the girl says at first that she is a little apprehensive, then admits that she dreamt of darkness and deep cold the night before.

When Prince Kellen arrives, Amara is disappointed to learn that she will have to remain in the boat with him upon the lake. The prince cannot be left alone, after all! Amara’s desire to dive and show off must take a backseat to her duty, which is to keep the prince safe while he watches her sisters as they fish in their cormorant forms.

She tries to hide her disappointment – she is being entrusted with an important and not unpleasant task, after all – but Kellen notices her unhappiness. He apologizes for denying her the opportunity to dive. Amara, however, remembers her manners and insists that she will be fine. She then does her best to make him feel better and to answer his questions about her family’s special power. When her sisters begin the show, the prince is enthralled and no longer sees how much she wishes to join them.

Soon after the performance begins, Amara’s four-year-old cousin, Svend, falls overboard into the water unnoticed. As everyone else’s eyes are on the girls fishing in their bird forms, the only one to see him disappear is Kellen. Without even bothering to call out a warning, the young prince tosses off his cloak and dives into the lake after Svend. Amara and her sisters follow to help, only something interferes with the rescue of the two boys. Both are brought to the surface, her cousin safely but the prince is unresponsive. Kellen does not improve when they manage to get him breathing again, and Grobmutti soon realizes why: his soul has been stolen by the monster of the lake, the Grimly.

While this may seem like the standard beginning to a modern interpretation of the original fairy tales which brought it to life, Paths of Cormanor is far better than most of the attempts to recapture the magic of Grimm’s fairy stories that I have read. Modern attempts to adapt fairy tales or to tell new ones often suffer from the authors’ lack of respect for the source material. Or they fall flat because the writers try to update the narrative and dialogue to match modern sensibilities so that their audience will “relate” better to the characters and setting.

Both of these things result in stories that lack the passion and sincerity of the archetypal fairy tales, which remain popular due to the genuine truths they pass on. Thus modern re-tellings tend to be bland, dry, or hollow novels that have little to no true substance. Promised much by the cover blurbs, many readers find they are not transported to the time of the original tale but are dumped in a medieval renaissance fair too modern to be believed.

Jim Breyfogle does not fall into this trap. He promises readers a fairy tale, and he delivers it. No matter what happens, the world Amara and Kellen inhabit feels as though it sprang straight from the minds that gave us the original Germanic stories and myths. Nor are his primary protagonists and side characters transplanted from the current era to the past. They are all products of their time and place. Amara and Kellen may appear to be the stereotypical prince and princess of fairy tale fame at first, but the longer a reader travels with them, the more depth they gain. They have personality and thoughts of their own, making them greater than the supposedly flat characters of Grimm’s fairy tales. And their individuality only grows the longer one travels with them.

The Paths of Cormanor is an excellent homage to the fairy tales of the past. If you enjoy stories of strong heroines, courteous princes, horrible monsters, and plot twists that make you say, “Nooo! I didn’t want that to happen! That’s not fair!” then this is a book you want to pick up. It is worth the purchase price and then some, readers!

Paths will release November 1, 2021*. Thus the link to the book will be for pre-orders until its release. While you are pre-ordering it, be sure to pick up the collection of Jim Breyfogle’s Mongoose and Meerkat tales: Pursuit Without Asking.* I plan to review that book here once I read it. Having enjoyed the Mongoose and Meerkat tales in Cirsova Magazine*, this author can say that they are fun stories which anyone who loves sword and sorcery would appreciate. If you want to see the full range of Mr. Breyfogle’s writing ability, buying this volume while waiting for Cormanor to become available only makes sense.

Now I must get back to work on my own fiction – not to mention reading those books in my TBR pile! There is some good stuff there. If I do not get to it, though, you may not hear about it. So I had better put on my reading glasses and start working! 😉