A howlingly good series of stories waits for intrepid werewolf fans in this collection! Wild Souls: A Werewolf Anthology* has some of the best werewolf fiction I have ever read within its pages. From the back of the book: 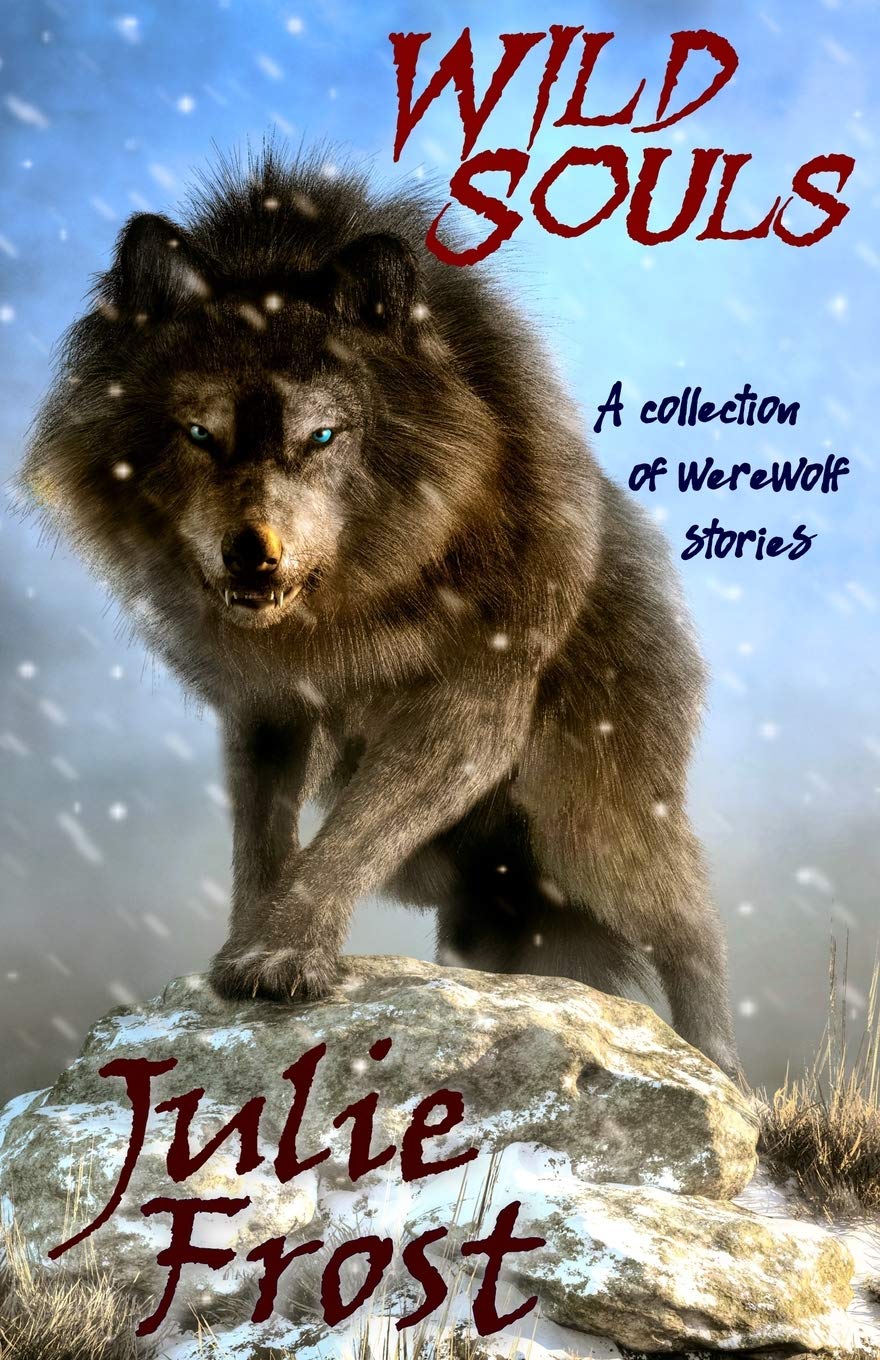 Julie Frost is best known for her Pack Dynamics series. However, in this collection, she explores other aspects of lycanthropy, with stories running the gamut of timelines from the ancient Celts to American Weird West to modern day – and even into the outer reaches of space. Ranging between humor and horror, with a cast of characters varying from witches to hunters to soldiers to angels and demons, there’s something here for everyone. Stories of families lost and found, new packs and old, love and loathing and loneliness…

And above all, what makes us human, and who the real monsters are. 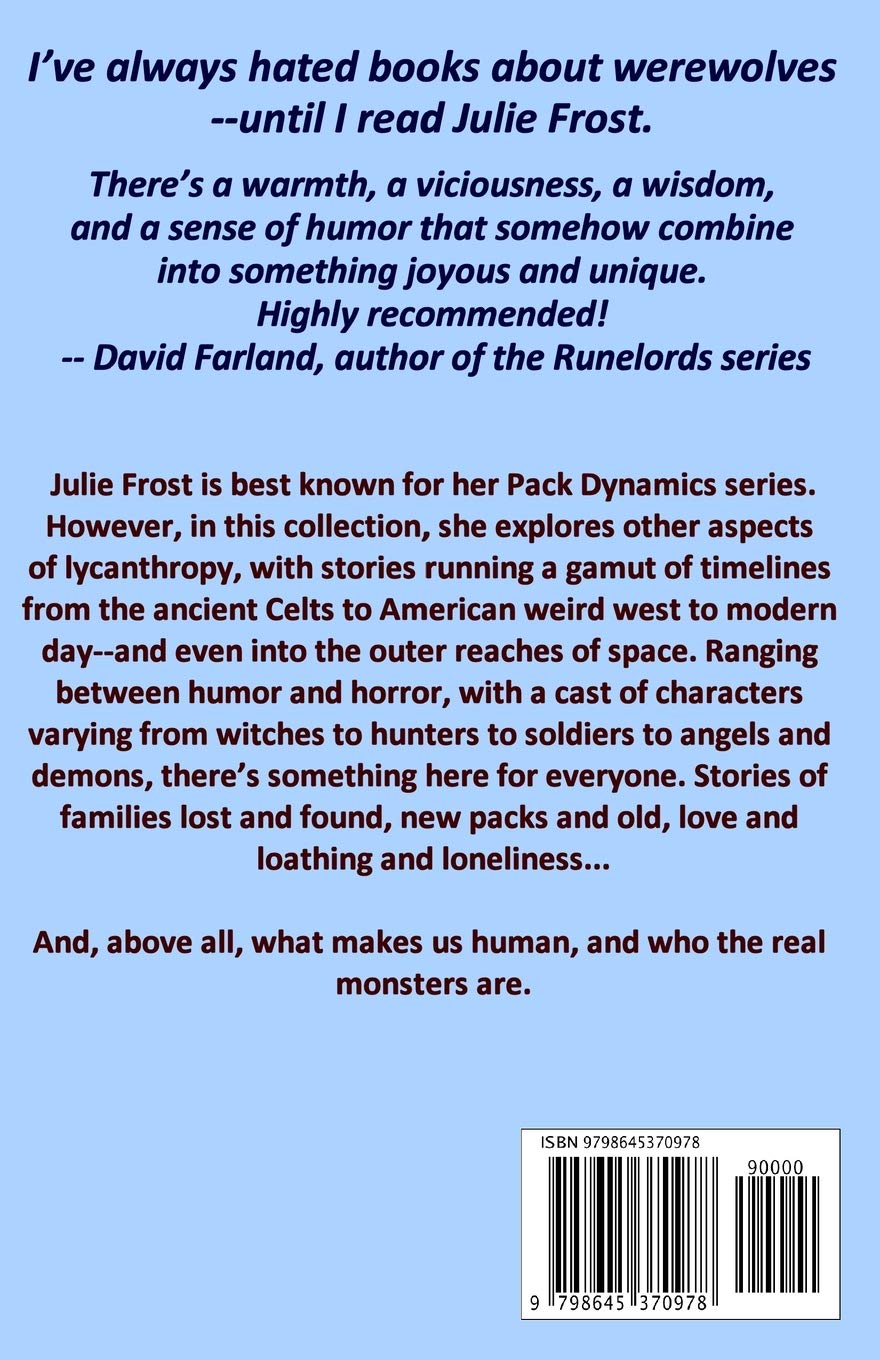 I have not been shy about my love for wolves. You will find out just how much I like them if you pre-order Cirsova Magazine’s 2021 Summer Issue* – the cover story is called “Lupus One” for a reason! So purchasing this book was, clearly, in line with my tastes.

And I was not disappointed, readers. The tales collected in this anthology are all enjoyable, even the ones that left me shivering and wishing I had missed out on the “nightmare fuel” to which they hinted! Werewolf tales tend to be considered the primary domain of Urban Fantasy/Romance genre writers, which can lead the audience to see them as one-note monstrous villains or misunderstood, abused heroes.

Ms. Frost ably sidesteps this illusion with her werewolf protagonists and antagonists. The first tale in the collection – “Objects of Allegiance” – takes place in a war between the ancient Celts and Romans, with the hero having been sent to reconnoiter the Roman lines. Unfortunately for him, the Roman detachment which he is supposed to spy upon is made up entirely of werewolves. And since they do not recognize him as a member of their pack, he is marked as easy prey!

“Alpha Equation” is the second story in the anthology, and it is just as strong as the first. Set in the far future, where space travel is commonplace, this hero’s pack is taken over by a brutal alpha that makes them bury their previous leader in an unmarked grave. Unable to physically overcome him, Cody Hawkins, the Omega in the pack, decides to simply leave. But how does a werewolf traveling through space avoid forced shifts when the ship he has chosen passes near a moon? And how long can even a werewolf run from his troubles?

The third story, “Identity Crisis,” is one of my favorites. I was fortunate enough to read this tale when it appeared on Sirius Science Fiction, an online sci-fi/fantasy magazine. I loved it then and was quite glad to discover that it held up well on the second reading when I found it in this collection. An intriguing, thought-provoking twist on hunter and hunted, this is a tale which I do not wish to spoil. Read it yourself to see how good it is!

One of my other favorite stories in this book is “Were-Critters, Widow Women, and Water Rights.” Weird West stories are not this writer’s preferred forte, since they sometimes focus less on “weird things in the West” and more on “weird things in a pseudo-Western setting.” As a fan of Louis L’Amour*, I tend to have high standards for the Westerns I read. If they cannot at least meet the bench mark of one of his lesser works, they are not going to stay on my shelf.

“Were-Critters, Widow Women, and Water Rights” is very close to the pattern set by Mr. L’Amour. It is a classic Western through and through, reading like a tale set in that time period. The fact that the protagonist is a werewolf, the heroine a witch, and that they both have to chase after thieves who have stolen a steampunk gadget that could upset the delicate balance of Western water rights is easier to believe than it might otherwise be because Ms. Frost nails the time period. Though it is impossible to remove these “weird” items from this Western adventure, the fact remains that this is a Western, plain and pure. It just happens to have a wolfish protagonist! 😉

“Man-Made Hell” and “Portrait of the Artist as a Young Werewolf” are good installments as well. The first is set in the future while the second takes place in an alternate universe. “Young Werewolf” is flash fiction; i.e. it is about a thousand words long. Despite being such a quick read it is visceral, grabbing the reader and making one want to see how the hero and heroine escape their predicament.

Although “Man-Made Hell” is longer, it is no less gripping. This is one of the stories that will make one think, even with the humor sprinkled throughout. Part space western, part space opera, I would have to say it is one of the more memorable pieces in this book. It is certainly one of the most entertaining!

Finally, we come to “With His Feathers.” This story feels like it could have been part of Jim Butcher’s famous Harry Dresden* universe – if he were of a mind to have an angel as part of a werewolf’s pack! Set to guard holy relics and demonic talismen (so the bad guys can’t use them), the hero and his pack come face-to-face with a hunter who has a demon backing him up. Even with an angel on their side, this battle promises to be difficult as the two villains need something very special to complete their hellish ritual – the feathers from an angel’s wings!

I can very happily recommend this collection to anyone, but for wolf lovers and those who love werewolf fiction, this is a must-read. Every story is thought-provoking and compelling, as Ms. Frost captures the imagination with her portrayal of werewolf life and “pack dynamics.” Even if you haven’t read her series by the same name*, pick up this anthology today and sink your teeth into it. You will not regret running through the night with these protagonists!