With thanks to Foxfier for the tip. 😉 I would have missed this bit of news entirely if she hadn’t tossed it my way!

Reading this article, one has to wonder what else is hiding under the ice. As long as it is not a Lovecraftian horror, a killer zombie disease, or something equally terrible, I will not complain about what scientists find therein. It will probably be fascinating. 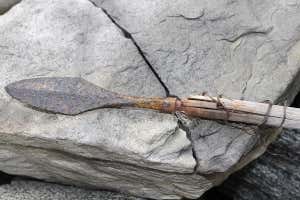 An extraordinary number of arrows dating from the Stone Age to the medieval period have melted out of a single ice patch in Norway in recent years because of climate change.

Researchers from the Universities of Cambridge, Oslo and Bergen gathered up a total of 68 arrow shafts, some with arrow heads still attached or nearby, and many other artefacts. Almost all of the items were found on an area of mountainside no bigger than 18 hectares in Jotunheimen, a region of southern Norway.

The oldest arrows date from around 4100 BC while the youngest are from roughly AD 1300, based on radiocarbon analysis. However, the dates aren’t evenly distributed across the millennia, raising questions about whether environmental conditions during some periods were more likely to preserve fallen arrows than at other times. Peaks and troughs in reindeer hunting activity could also have played a role.

In some cases, arrowheads of various materials have also survived, including bone, slate, iron, quartzite and one made of mussel shell. A few arrowheads even retain the twine and tar used to fix them to their wooden shaft.

2 thoughts on “History Emerges from the Ice!”