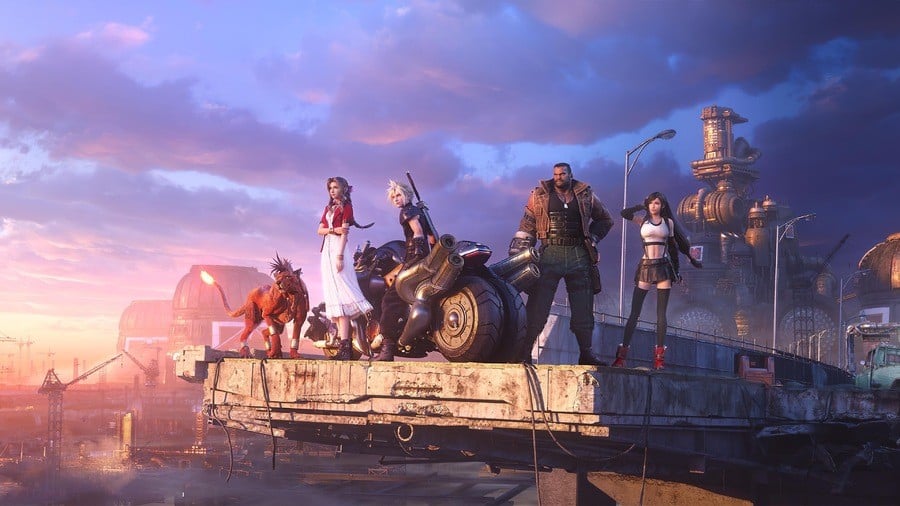 It has been said many times here that this author is not a video game player. Even so, this does not mean that she does not keep a finger lightly on the pulse of the video game scene. It does not pay not to maintain an awareness of the competition, after all. Besides, good ideas and storytelling methods can come from anywhere. Why shun a medium just because you have no skill in it or time to engage with it personally? 😉

Aleczandxr, a Youtuber who reviews various media, was recommended to me for good anime reviews. On looking up his backlog of videos, I found that he also reviews video games, as well as live action shows of interest to him and his supporters. One of those videos focused on Barrett Wallace as he was portrayed in the Final Fantasy VII Remake*. It was a very good look at the character and how the new game improved on his portrayal.

So when I saw that Aleczandxr had made a three-hour review for the original FFVII game and the Remake, I had to see it. Though I have to take the video in bits and pieces due to work, it has proven as illuminating as I had hoped. Aleczandxr highlights the games’ strengths and weaknesses, and if you are a newcomer to Final Fantasy VII* or have only played the Remake, then this review would be invaluable for you as a player.

Old fans will find much to enjoy and ponder in the review as well, since Aleczandxr lays out why the Remake is still good despite the changes it has made to the original story. These are separate from the artistry of the new graphics systems, which make the game eye-candy no matter how one looks at it. In some ways, the Remake could be considered its own movie. The sheer amount of programming that went into this product is flabbergasting, and in some small scenes, a viewer can forget he isn’t watching real people. The creators did not spare any expense in making this game as beautiful as it could be.

Writers, whether they are fans or not, will find this review helpful as well. The differences between visual media mean that they each require various techniques to accomplish their goals of telling a story well. But some methods are basic and universal; they can also be extremely subtle. Aleczandxr touches on all of these at one point or another in his review, which makes it beneficial for writers of all stripes. Sometimes, to paraphrase Gandalf*, we forget much that we (thought) we knew, and remember things we only barely knew.

If you can work a viewing of this admittedly long video into your schedule, I highly recommend it. Aleczandxr has added chapters/time stamps to the video in the description, making it easy to hit the parts you want to hear immediately and return to the less interesting bits at a later time. So you need not worry about sitting for three hours straight to get his entire perspective on Final Fantasy VII and Final Fantasy VII Remake – unless you have the time for that, of course. You can view it as often as you need to in order to complete the video.

Enjoy this review, readers. I know I will, because it is something I am going to come back to whenever an opportunity presents itself. It is too good a resource to pass up!

The Story of Final Fantasy 7 .. So Far | A Comparative Exploration of the Original AND Remake