Lots of jokes are made about Americans’ fascination with big things, but these days few people seem to consider why we like our machines, states, and food to be big. It is because we are a big nation, in every sense of the word. This isn’t just in terms of landmass but in what – and who – lives on it and where.

In America you can find tundra, taiga, plains, jungle, desert, and mountains. The Appalachian mountains are hills compared to the Rockies, certainly, but that does not mean they are small. The rivers and lakes, the coasts and forests are all enormous. You will not find this same variety on such a scale in Europe, and most other places in the world that share similarities with American biomes are not always as hospitable as most of the United States.

The North American country is big, and as such, its people tend to think big. That’s why we have city-sized aircraft carriers, towering metropolises like New York, and as the article below makes clear, big trains.

Steam engines are largely relics of a past time. With electric trains, diesel trains, and so on, they are no longer efficient or practical enough to ferry passengers and freight from place to place as they once were. This is true no matter where you go in the world today, as you will only find modern trains in use across the planet.

But as with all items that fade from use, there are those who refuse to let these magnificent works of art (yes, art, readers) fade away into the past. This is why, from Thomas the Tank Engine* to Kabaneri of the Iron Fortress*, steam trains still fascinate audiences around the world. And why rail enthusiasts still maintain and/or restore the “Iron Horses” which tamed a country and made the modern world what it is today.

Popular Mechanics* caught up with the crew that restored the biggest of the American Big Boys in 2019. Big Boy 4014 has needed quite a bit of work, but even casual train fans have to admit the effort and time were more than worth it. The train made appearances in 2019 for the anniversary of the unification of the Central Pacific and Union Pacific railroad tracks, which occurred in Promontory, Utah in May of 1869. The article below goes into more detail but suffice it to say that this mammoth task had some equally prodigious rewards.

Learn more about this gargantuan project below, readers. And if you have the opportunity to see this Big Boy trundling down the tracks, take it. Nothing lasts forever, and eventually even this fantastic machine will not be able to thunder down the rails safely anymore. Better to watch it fly by while you can then to wish for iron horses like a beggar starved for beauty! 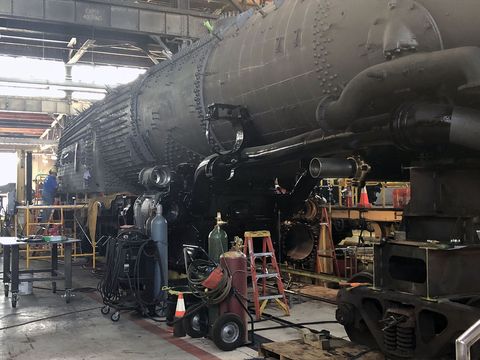 In railroad lore, one steam engine stands above the rest as the ultimate expression of American Industrial art and science. Dormant for decades, it now lives again, restored in all its glory.

Americans like things big. Big like Texas, big like the rolling Mississippi, big like the heaviest made-out-of-butter cow sculpture. They also like things with big meanings, like the Declaration of Independence, D-Day, and the driving of the golden spike to join the rails of the first transcontinental railroad, connecting the Central Pacific and Union Pacific lines on May 10, 1869 at Promontory, Utah.

The 150th anniversary of that unifying event recently took place, and the commemoration welcomed a merging of that metaphorical big with the literal: the return to service of one of the most heralded—and biggest—locomotives of all time.

The steam-driven locomotive might seem like a relic of bygone days, but tell that to the people cheering all the way to the clouds when the Big Boy 4014 pulled into Ogden for the Golden Spike ceremony, a steaming nova among other star locomotives.

Big Boy’s journey wasn’t an easy one; its roaring up the ceremonial rails seemed an improbable gamble, considering that all eight existing units (of the 25 built for Union Pacific) of the Big-Boy-class steam engines had been decommissioned long ago. The 4014 was retired in late 1961, and spent the next 52 years eliciting gasps and whoops of delight at the Rail Giants Train Museum in Pomona, California.

If you liked this article, friend Caroline Furlong on Facebook or follow her here at www.carolinefurlong.wordpress.com. Her stories have been published in Cirsova’s Summer Special and Unbound III: Goodbye, Earth, while her poetry appeared in Organic Ink, Vol. 2. She has also had stories published in Planetary Anthologies Luna and Uranus. Another story was released in Cirsova Magazine’s 2020 Summer Issue. Her most recent piece is available in Planetary Anthology: Sol. Order them today!

4 thoughts on “Thunder on the Rails”