Here we have a special review, readers! I was privileged to receive an advance copy of Cirsova Magazine’s 2021 Spring Issue* in order to review it. From the description: 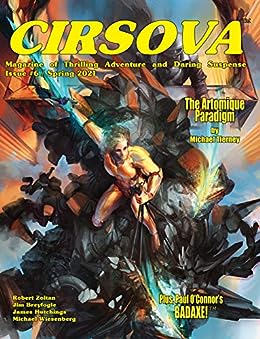 The Artomique Paradigm (Part 1 of 3) by Michael Tierney

Earth is now in contact with their intergalactic cousins! But during recent conflicts with aliens and pirates the Artomiques, fascist refugees from an alternate timeline, have become Terra’s dominant faction using stolen Wild Stars technology!

The Grain Merchant of Alomar by Jim Breyfogle

The Mongoose & Meerkat have set up in the city of Alomar – in spare rooms of a wealthy merchant who has no idea they’re living there, even after he’s hired them!

A gambler and a wannabe cardsharp, Henry finally has an Ace up his sleeve: the ability to see a moment into the future – a diabolical gift from the Devil Himself!

The Book of Dark Sighs by Robert Zoltan

Dareon and Blue, the Rogues of Merth, find themselves in the crosshairs of an old foe! They must find for him a powerful tome, or Blue’s love will perish at his hand!

My Name is John Carter (Part 9) by James Hutchings

The next installment of the translation of A Princess of Mars into poetry.

The fearsome legions of the God Badaxe are on the march, cleaving a bloody swath through the magical land of Pangea. Countless villages have been burnt to the ground, their young male populations examined and beheaded. Somewhere, a boy with a strange birthmark on his right palm poses a deadly threat to the most powerful being in Pangea – if he is allowed to reach maturity!

This issue is loaded, readers. And I mean that in the best possible way; this is a good issue full of good stories. Each one had something to recommend it, and each was strong in its own way.

First we have The Artomique Paradigm. If you can picture one of the best Marvel time travel stories mixed with Doctor Who, Star Wars, Dune, and Flash Gordon, then you would have an accurate image of this latest installment in the Wild Stars* universe. The worlds explored by the story are rich, varied, and feel very lived-in. If Star Wars is a space opera appetizer while Flash Gordon and Dune are main courses, then Wild Stars is a very sweet dessert.

Some of the characters felt a little distant, but as they are not the main people by which we view events in this installment, this makes sense. More than likely they will be fleshed out and become more interesting in the subsequent chapters. It was also difficult to keep track of who was who and what was what. But once she settled in to the rhythm of the tale, this writer found The Artomique Paradigm quite enjoyable. Reading Wild Stars proper is definitely on this author’s list of things to do in the future.

The Grain Merchant of Alomar, the title of the following tale, is a neat little Mongoose and Meerkat adventure. The action we get is sharp and precise, but it is not the central focus of the story. Mangos and Kat have to see beneath the surface not only to survive the “sudden, but inevitable betrayal”* that befalls them during this escapade, but to aid the person who needs their help.

I enjoyed this installment a great deal. Between the characterization and the worldbuilding, it drew me in very strongly. I wanted to see what happened next. Though I think Mangos needs to use his head a little more than he does, the tale was a satisfying adventure all the way around, and I would happily recommend this issue on the strength of this episode alone. Luckily, the other stories in this issue are equally good. 😉

Devil’s Deal is the next, and shortest, tale. It has the feel of a 1970s ballad, and the ending can be seen a mile away. Unless the Bad Guy is dealing with a saint or a fiddler from Georgia, these types of tales always end with him winning. This story demonstrates that the author clearly loves the game of poker, and I find nothing wrong with that. Like any game, poker can be taken to extremes. Play it seriously with respect and you’ll be happy; but if you play it obsessively and to excess, you might find yourself making bargains with the devil. It is difficult to say much more for fear of spoiling the story! Robert Zoltan’s The Book of Dark Sighs had echoes, for me, of Indiana Jones and Louis L’Amour’s* Diamond of Jaru. It is set in a civilized place that, nevertheless, holds great danger for the unwary. Add a dash of Rudyard Kipling* and put the whole tale in an alternate world, and you have a fantastic adventure to a hellscape that is more than it seems. While I personally thought the descriptions of the hellscape and the torments therein went on a bit long, they made their point and served the story well. I do think they could have been shortened.

Nevertheless, The Book of Dark Sighs is a good read. Dareon and Blue have a wonderful, brotherly dynamic that shone through in their banter, and their decisions made sense. The magic in their world and the hell plane was well thought out even as it kept its mystique. And the ending was quite satisfying – though I hope this is the last we see of that particular villain. I want to watch the two intrepid adventurers fight against someone new next time! 😉

My Name Is John Carter was a pleasure to read. I have had poetry read and/or recited to me from the time I could toddle, so I have a good ear for meter and rhythm as it was used by the masters. This means that reading modern bland and/or free verse typically gives me a headache. So finding a longform poem that actually holds to the traditional norms of the craft was a lovely experience indeed.

Lastly, we come to Paul O’Connor’s digitally remastered comic: Badaxe. This sword and sorcery comic is captivating. Tanree, the heroine of the tale, is drawn well. Think of Xena, but raised like Mowgli so that she has some of Wolverine’s animalistic tendencies, and you come close to how she is portrayed. Her world of Pangea has more than a few echoes of Conan the Barbarian’s Hyperborean Age, but it is a distinctly different place.

Badaxe himself is a nasty piece of work, shown as much by the behavior of his legions as by his terrible appearance. He has his general kill every young male regardless of whether they have a mark on their right hand or not, and it doesn’t sit well with the old soldier. Being a man of duty and loyalty, however, the general has not denied his god’s request. Given the way this first installment ended, I am inclined to think that Badaxe has his people looking in all the wrong places.

If you are just coming to Cirsova Magazine for the first time, I highly recommend this issue as an entrance to the magazine proper. With two major cliffhangers, one ongoing poem (this is part nine), and three great standalone tales in its pages, this issue is an ideal access point. The following issues this year will continue these serials while including new stories, so you can consider all four of them a trial run. If you like what you see, it won’t be hard to research Cirsova’s back catalogue at their Aerio store to find more fun issues to read.

So go pre-order (or pick up, if you’re reading this after March 15, 2021) Cirsova Magazine of Thrilling Adventure and Daring Suspense Issue #6/Spring 2021 and start reading it today. There are three variant covers to choose from, as this issue celebrates five years of Cirsova publication. It’s a two-in-one deal that may just give you the entertainment you did not realize you were searching for!