Here we have another review, readers! Today’s book is an anthology put together by Mr. J.F. Holmes* for Cannon Publishing. It focuses on mecha, the titanic battle machines (usually with humanoid or animal forms) that serve as tanks in speculative fiction. From the blurb on the back: 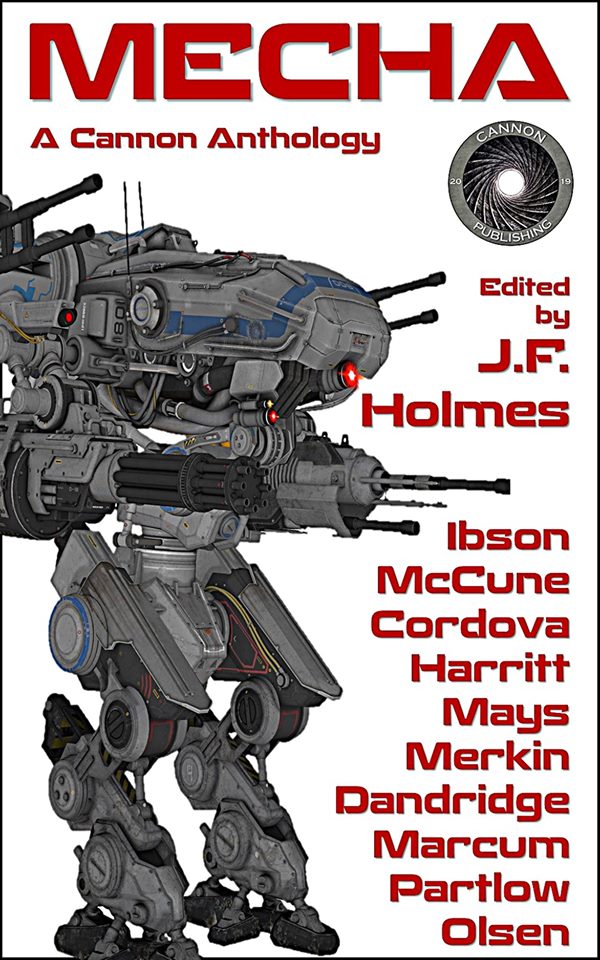 Feedback from the slight pressure of a hand closing sends a powerful mechanical arm smashing into an opponent. A neural link hurls blustering plasma fire from your suit’s shoulder mounted cannon. Your reactor levels scream with overload as return fire smashes into your armor, and damage alarms wail while you hurl your twenty ton body sideways for cover.

You’re a Mecha, a mechanical fighting machine with a human pilot. The guy that the infantry curse at in training and pray for in combat. The machine that strikes fear deep into alien hearts as they hear your turbines power up. The one able to pass through hell and come out the other side victorious, or die trying.

Cannon Publishing brings you ten stories from current masters of military science fiction that will take you from the magic of a Medieval village to the edges of the galaxy to fight inhuman foes.

Technically, there are plenty of human foes to fight as well. It is not just aliens and monsters that feel the bite of steel, controlled but forcefully applied. People are mown down by, with, and in these fantastic fighting machines as well. But yes, plenty of aliens and beasts find themselves staring at piloted mecha during the course of the tales in this book.

As before, I will only mention a few stories in this review. Though this collection has fewer entries within it than Fantastic Schools, Vol. 2* did, it is still an extensive anthology. For this review to be pithy and to the point, this writer must leave out mention of certain stories to focus on those she enjoyed more than the rest.

Of these, “Stack Knight” by Thomas Mays is a captivating little piece set in a Medieval fantasy world. This story is straightforward, even though some of the details are not quite clear to begin with. The writing flows well, the characters are engaging, and the science is believable. The magic that was used in the piece fit well with the worldbuilding and did not feel the slightest bit out of place.

It bears mentioning that while the story line followed a familiar pattern, it did so in a genuinely imaginative manner. Although I figured out the finale before reaching it, the ride was quite enjoyable nonetheless. There was more creativity demonstrated in this tale than has been present in a dozen similar plots from many present-day writers. If I had to gripe about anything in particular with this story, it is that it was too short; I didn’t get to spend enough time in this strange setting with these fascinating people.

Next is Rick Partlow’s* “The Guardian.” An enthralling tale set in a futuristic world much like the Grecian Sparta. The planet actually bears this ancient name, and its soldiers fight as fiercely as the people whom they imitate. Betrayal and love of hearth and home feature in this tale of a father who is “afraid and vulnerable.”

This is one of the best stories in the entire collection. I would feel comfortable recommending this anthology to a reader based on this entry alone, as the story would make an excellent television show or film. It would not need much expansion to fit in either venue with ease. Yes, readers, it is that good.

“Graduation Day,” by Yakov Merkin*, is a great piece as well. I enjoyed this tale immensely, in no small part because I am a Zoids* fan. Unlike the mecha in the rest of the collection, the mechanical tanks in this story are quadrupeds, not bipeds. They resemble wolves and are controlled by a crew of three: a pilot, a gunner, and an engineer. Besides the visceral combat and good characterization, this story includes a charming romance between the main character and his gunner, which adds an extra dimension of fun and tension as the story races toward the titular Graduation Day.

I highly recommend this story to any and all fans of Zoids, the Japanese mecha series currently undergoing a resurgence in the Orient while making its way Westward once again. Additionally, I would say that Mr. Merkin’s piece outlines the proper attitude toward bringing about the #ReturnoftheZoids, since “Graduation Day” is an able homage to the franchise, not a paint-by-numbers reprint. While Zoids fans can tell where some of the ideas and items in the tale came from, the story is a unique pastiche created in honor of the franchise. It definitely deserves a read.

“Maelstrom Rising,” by Jason Cordova, is hampered by a particular use of third person Point of View (POV). The writing slips in and out of the third person omniscient POV for the main character, rather than a closer, more personal third person POV. Third person omniscient has largely fallen out of favor among readers and writers, but it is an all-too-easy transition to make if the writer is not being careful. While I rate the story highly for the moral it contains and the action that propels it forward, it must be admitted that the narrative’s force was lessened by this type of voice.

Finally there is “Maintenance Mode,” a neat little piece by John M. Olsen. In some ways a comedy, in others a deadly serious adventure, the story follows a maintenance tech who must take control of the mecha he maintains to save innocent lives. The focus here is less on combat and more on how engineers are not to be trifled with since they know how to take things apart as well as put them together.

Not all engineers and technicians resort to bigger wrenches or explosions to deal with those who annoy them, either. While there are some impressive pyrotechnics in this tale, the main way in which the protagonist wins is by using his natural cleverness and understanding of technology. The ending for this story made me smile.

If you are a mecha fan, a military SF reader, or even if you are just looking for an adrenaline-fueled romp, I recommend picking up the Mecha Anthology. The mecha may be the biggest attraction, but there are also plenty of intriguing ideas, nifty plot twists, and well-executed characters to make the purchase worthwhile.

You do not need to take my word for it, however. Buy the book today and read these tales for yourself!