I should have bought volume one first, I suppose, but what can one do? Fantastic Schools, Vol. 2 was right there. So this author purchased it.

Have you ever wanted to go to magic school? To cast spells and brew potions and fly on broomsticks and – perhaps – battle threats both common and supernatural? Come with us into worlds of magic, where students become magicians and teachers do everything in their power to ensure the kids survive long enough to graduate. Welcome to… Fantastic Schools.

Follow a mundane teacher striding into the world of magic, a spy on a mission, a guided tour of a magical school, a school dance for monsters, a dangerous reunion… and many more.

Just as the above blurb states, the stories in this volume all take place in or around magical schools – that is, schools where magic is taught. I will not describe all of the tales enclosed in this volume in this review, for the simple reason that there are too many to discuss fully. This is supposed to be a brief analysis, after all. 😉

Fantastic Schools, Vol. 2* is an enjoyable anthology. It starts out strong with a piece by J.F. Posthumous*. What makes her story stand out from beginning to end is the manner in which the main character interacts with this world. He is a teacher with no magic, yet he is sent to teach at a school where everyone wields it. That in itself is a concept which far too many writers tend to leave by the wayside. I understand that Misha Burnett* has a book featuring a powerless cop in a magical world, but that is the only current example this author can recall at the moment.

Although Ms. Posthumous’ style is not quite this reader’s preferred one, this does not hurt the story. I was actually rather disappointed that it ended where it did; I would have liked to see what happened afterward. If she has or will expand on this world, then she will have an eager reader waiting to snap up those stories! As it is, her Lady of Death* novels sound like worthy reading. 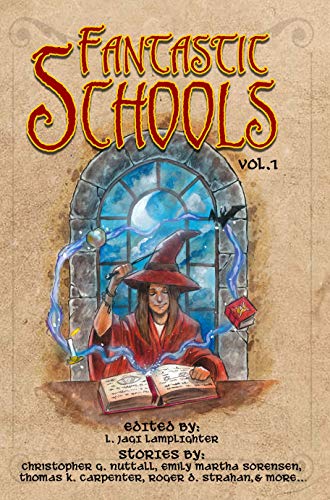 James Pyles’* tale was likewise entertaining. One does not think too much about magical pre-school, but it makes sense. Allowing little children with a lot of magic to throw it around willy-nilly is just asking for trouble. Bewitched* demonstrated that fact over the course of several episodes, after Darren and Samantha had their young children. So in Mr. Pyles’ story, someone took the precaution of building a pre-school to teach these precocious little ones the importance of control.

But teachers can be hard to find, even harder to vet. What can one grandmother do when she suddenly has the impression that leaving her granddaughter in the hands of the new teacher was a very, very bad idea?

As resolutions go, this story had a good one. Some of the introductory details are a touch blurry, in part because this tale seems to be the follow-up to the aforementioned grandmother’s previous adventures. Even so, once the action starts, it carries through and does not let up. The ending is sweet and justified – not bad for a story that takes place in a pre-school!

Patrick Lauser’s story about what at first appears to be a fairy child or changling is an interesting mystery. It does not take place in a school, though there is one mentioned within the narrative. Since it is a mystery there are some details which only become clear the longer one reads. But the finale pays off any frustrations a reader may have in reaching it. I would rate this as a very good tale, as it makes one think long after the final page is turned.

Audrey Andrews’ short story was another good entrance in the collection. It takes place in a college, and one of the heroine’s friends is into drugs. Nevertheless, it is an engaging piece. What does a girl who has difficulty making friends do when she becomes entangled in a search for a monster on campus? And what ought she to do when the intriguing young groundskeeper helps her defeat said beast? 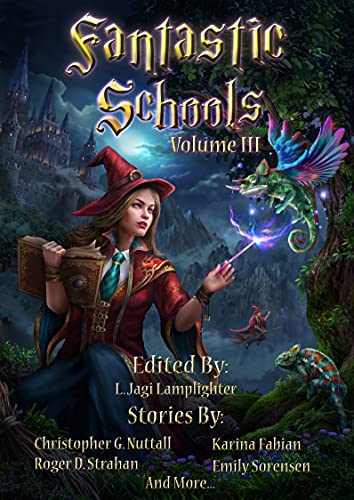 Jagi Lamplighter’s* and David Breitenbeck’s tales round out the collection. Having ventured into the world of Rachel Griffin previously, I found the return to that universe quite pleasant. The story has a good pace, is child-friendly, and the heroine remains as engaging now as she did when I first encountered her. In fact, since this story takes place after quite a bit of character growth, Rachel’s maturity shines brightly in this piece. “Rachel Griffin and the Missing Laundry” is definitely a must-read for any fan of The Books of Unexpected Enlightenment series*.

So too is Mr. Breitenbeck’s* “Halloween Dance.” The Van Helsing Academy for Troubled Youth might be considered the X-Mansion for monsters. Youths who have been transformed into beasts or who have been trapped in inhuman forms one way or another find shelter within the walls of the haunted mansion that serves as their school. Between their own conditions (some of them have deadly appetites), and the strange things that wander through the school, which straddles the border between the physical and supernatural world, it is not an easy place in which to live.

Now that you have a picture of the school’s general atmosphere – everyone in the Academy is always looking out for some kind of disaster, minor or major – you will understand the hero’s consternation when the teachers announce the school’s first dance. Are they out of their minds? Or are they trying to teach their students something new?

These and other stories contained within Fantastic Schools, Vol. 2 are well worth your time and your money, readers. It will make a great Christmas or birthday gift for any fantasy fan, allowing them to meet new authors they may not otherwise encounter. Pick it up today, readers! You will not regret it.

*These are Amazon affiliate links. When you purchase something through it, this author receives a commission from Amazon at no extra charge to you, the buyer. If you liked this article, friend Caroline Furlong on Facebook or follow her here at www.carolinefurlong.wordpress.com. Her stories have been published in Cirsova’s Summer Special and Unbound III: Goodbye, Earth, while her poetry appeared in Organic Ink, Vol. 2. She has also had stories published in Planetary Anthologies: Luna and Uranus. Another story was released in Cirsova Magazine’s Summer Issue. Her most recent piece is available in Planetary Anthology: Sol. Order them today!