Whew! What a ride! I cannot remember the last time I read a book where the end left me feeling as though I had experienced a crash-landing. Here is the blurb for the book: 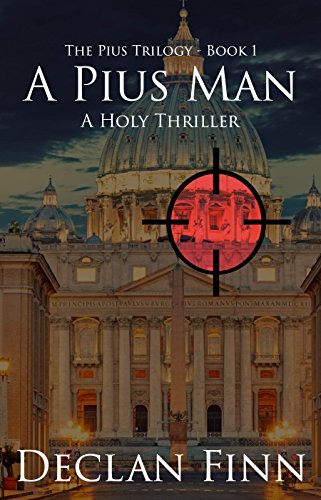 Murder at the Vatican!

Giovanni Figlia checks all the boxes of a typical police detective. He even sacrificed his soccer career to follow in his father’s footsteps after he was killed in the line of duty.

But instead of being a typical police detective, Figlia is head of Vatican security. He must keep the new pope from Africa, Pius XIII, safe from a world increasingly hostile to Catholicism.

Then a body falls onto the Vatican’s doorstep, and before Figlia can even start to track down the killer, more violence pours into Rome.

Can Figlia discover who is murdering scholars in the Vatican? What secret are they trying to keep hidden?

And can he keep the Pope safe?

You can read the rest of the description if you click on the Amazon Affiliate link*, readers. Suffice it to say, I was impressed with Mr. Finn’s debut novel (of some years ago) which has been republished by Silver Empire Publishing. Having read some of his other work, this author had an idea what she would be getting – which is why she ordered more than one of his books. Those will be reviewed at a later date.

Though Giovanni Figlia is the character listed on the back cover, I would not say he was the main character in the tale. Finn happily hops from one character’s head to another, giving a reader insight into how each one of them ticks. Whether it is Giovanni Figlia, Father Frank, Sean A.P. Ryan, Wilhelmina “Villie” Goldberg, Scott “Mossad” Murphy, or one of the other great people in the cast, he makes sure we get to know all of them.

I have to say that the character I enjoyed tagging along with most was Sean Ryan. The guy is practically a walking disaster magnet, but that is part of what makes him so much fun. He gets to do everything the reader wants to do; overhear important conversations, catch hints the rest of the group does not pick up on until later, meet the heroes hiding in the shadows, and so on. Best of all, he gets to blow stuff up. And fight. And kill the bad guys. Or just drive them all nuts.

Finn does not begin the book in media res. The bodies only begin to pile up at the very end of the Prologue. This allows for quite a bit of set up, which can seem overwhelming until the shooting and the explosions start. Poor Figlia’s car never stood a chance of surviving the encounter with the corpse tossed out the hotel window onto its hood. But at least it solved Figlia’s boredom issue.

When this author reads thrillers or mysteries, she is accustomed to figuring out the villain fairly quickly. She also tends to identify the bad guys and what they want early in the tale. If there is a traitor involved, she can often pick him/her out with relative ease by the middle of the book, at the latest.

I am happy to say that, this time, she had no idea who was the killer and who was not. When a traitor appeared, it was not who this author expected it to be. In fact, her exact thought leading up to the reveal was, “No! Oh, man, but I liked this person! I didn’t want them on the wrong side of the fight! Oh, darn!”

It has been a long, long time since a writer managed to confuse me so thoroughly, let alone pull the wool over my eyes for most of the novel. Learning the craft of writing means one usually recognizes the tricks and traps set out by other authors in their works fairly quickly. This is the first book in a while where I ended up playing catch up. To say it was fun would be quite the understatement.

All the same, while enjoying this book immensely, there are a few flaws. Finn does quite a bit of head hopping in A Pius Man and, while I adjusted to the pattern, others might find it disorienting. There are also grammatical missteps and spelling errors. A reader can overcome or roll with these if their disbelief is suspended long enough to accept the story’s pacing. However, it can be annoying to have to re-read a sentence that repeats itself part way through. Reading several that do not end with the proper punctuation, that are broken midway through, or which only appear on the next page is also bothersome.

One other area which is not quite accounted for in A Pius Man is that some descriptions seem to break off mid-sentence. It is as though the author was writing so fast some of the sentences intended to transition from one action to another were not written (i.e.shooting in a kneeling position to standing while shooting). Given how much I leave out when writing quickly under inspiration’s lash, I suspect these small breaks are the result of an author writing their story at a gallop, then editing at a similar pace.

None of these items prevented me from picking up the book. Nor do they give me pause in recommending it anew. A Pius Man is a good story; the characters are engaging, the emotional beats are in all the right places, and the surprises are actual surprises. As mentioned above, the pace is fast enough to make putting the book down feel like a crash landing.

If you are looking for a good thriller, I definitely recommend A Pius Man. The book was so good that I read it in two days, despite the criticisms mentioned above. That does not happen often, readers.

So do not hesitate to pick up A Pius Man or one of Declan Finn’s other works* today, readers. You won’t regret it.

*These are Amazon affiliate links. When you purchase something through them, this author receives a commission from Amazon at no extra charge to you, the buyer. If you liked this article friend Caroline Furlong on Facebook or follow her here at www.carolinefurlong.wordpress.com. Her stories have been published in Cirsova’s Summer Special and Unbound III: Goodbye, Earth, while her poetry has appeared in Organic Ink, Vol. 2. She has also had stories published in Planetary Anthologies Luna and Uranus. Her work was published in Cirsova Magazine’s 2020 Summer Issue, and her most recent piece is available in Tuscany Bay Books’ Sol Anthology. Order them today!

One thought on “Review: A Pius Man: A Holy Thriller by Declan Finn”