If there is one thing I do not understand, it is why the Almighty made so many insects and arachnids so BIG. Bad enough to have foot long ants in South America, funnel-web spiders in Australia, and other large specimens from different species, now we have thumb-sized bees. Great….

Thought extinct for the last thirty-eight years, Wallace’s giant bee has been rediscovered in Indonesia. Alive and well (and thankfully uninterested in taking a bite out of humans), the bee appears to be doing just fine. That is more than can be said for this author, who will probably use it as a basis for a carnivorous alien insect in a future story.

I am only half-joking. If you have a fear of insects, hearty reader, then “bee” prepared to find an enormous Megachile pluto in one of my stories down the line. There are no permanent designs for any such creatures – yet – but the ingredients are on the shelf.

Until that story emerges, however, settle in with some bug spray and look up the link below to learn more about this titan among bees! 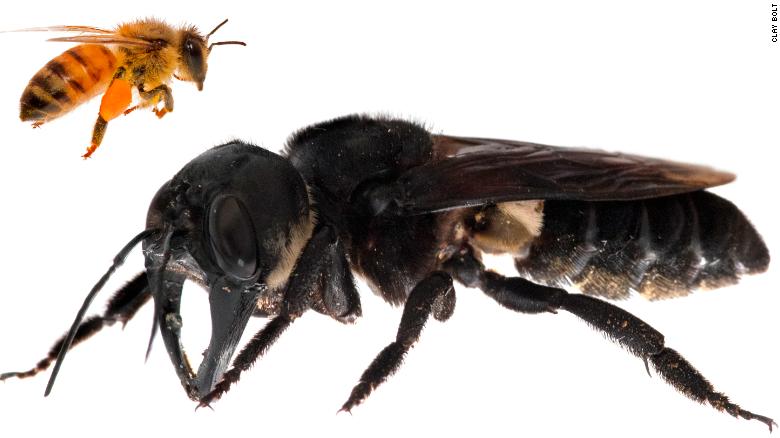 World’s Biggest Bee, Once Thought Extinct, Has Been Found Alive

A black, thumb-sized missile sails through the jungle air, a thunderous buzzing announcing its arrival. The massive insect lands heavily on a tree-bound termite nest, taking a moment to fold its brassy wings and stretch its humongous, curved jaws. This is Wallace’s giant bee, the beefiest and bumbliest bee on Earth. After going missing for nearly four decades, the species has just been rediscovered in its native Indonesia.

Wallace’s giant bee (Megachile pluto) gets its name from its original discoverer, Alfred Russel Wallace, the British naturalist famous for independently conceiving the theory of evolution through natural selection alongside Charles Darwin. Wallace collected the bee while on an expedition in Indonesia’s North Moluccas islands in 1858, describing it as a “large black wasp-like insect, with immense jaws like a stag-beetle.” The tiny titan then went more than a century without being spotted by Western scientists, only seen again by entomologist Adam Messer in 1981, who was able to observe some of its behavior on a number of small islands. But since then, no one had documented any encounters with the huge bee.

That all changed when a search team visiting the North Moluccas last month laid eyes on the bee for the first time in 38 years.