Okay, technically, this fish wasn’t smiling. But at least it stayed quiet long enough for to be photographed before being released.

No, readers, your eyes are not deceiving you. That is, indeed, a twenty pound goldfish. Not a real goldfish, like the pets kept in household fish tanks. This one appears to be a butterfly koi that reached a very impressive size in the wild.

How this koi got into the pond is anyone’s guess, but it is not the first of its kind to be released into American rivers, pools, and lake. Nor are its cousins; apparently, Washington and Nevada are both dealing with an invasion of goldfish in their lakes and other fresh water sources. Other countries’ lakes and rivers have been invaded as well. This article explains more about the situation.

Luckily for this pond in Kentucky, the only uninvited guest discovered so far has been this koi. Learn more about its capture in the fun piece below, readers: 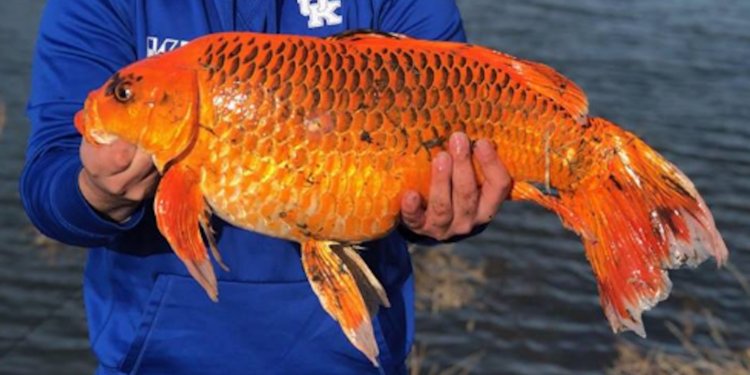 A Kentucky man caught this rare 20-pound koi in a private pond.

A Kentucky man made a rare catch while fishing over the weekend.

Hunter Anderson told WKYT that he and his girlfriend were driving back from Frankfort when they decided to stop at a private pond in Boyle County.

Lacking the typical bait, the 20-year-old decided to tempt fish in the pond with a leftover biscuit from breakfast.

Soon, Anderson was reeling in one of the strongest fish in his life.

2 thoughts on ““The Snack that Smiles Back””