Long unknown to the West, recent archeological discoveries have brought the women warriors from the Land of the Rising Sun international attention. Known as Onna-bugeisha, these female samurai were few (the last known corps of Onna-Bugeisha numbered around thirty individuals), but they were fierce and capable fighters. It is said that they were particularly skilled with the naginata, or polearm sword, a staff with a short blade embedded at the top.

Though forgotten in the West, the Japanese still revere their warrior women. To learn more, check out the link below, readers. The onna-bugeisha deserve to be recognized and remembered outside of Japan: 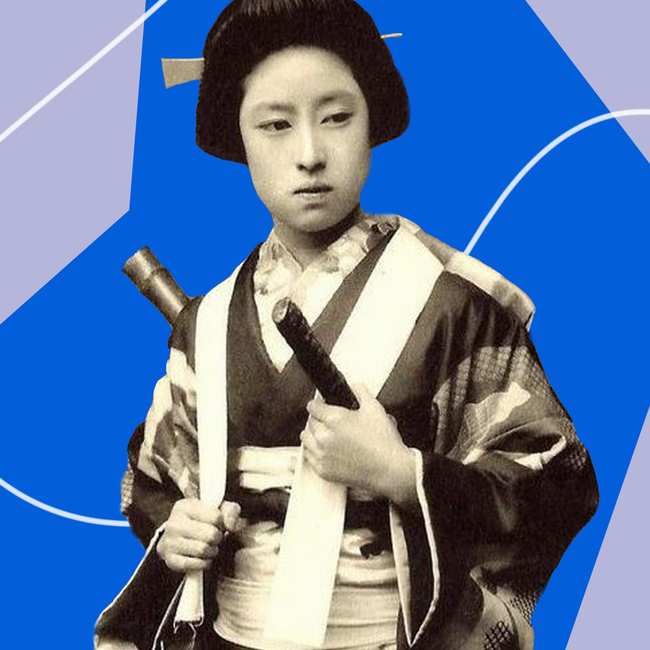 How Onna-Bugeisha, Feudal Japan’s Women Samurai, Were Erased From History

While most Japanese women were subject to rigid social expectations of domesticity, onna-bugeisha women warriors who were known to be to be every bit as strong, capable, and courageous as their male counterparts

It was the autumn of 1868, and for the samurai warriors of the Aizu clan in northern Japan, battle was on the horizon. Earlier in the year, the Satsuma samurai had staged a coup, overthrowing the Shogunate government and handing power to a new emperor, 15-year-old Mutsuhito, who was wasting no time in replacing the feudal ways of the ruling Tokugawa with a radically modern state. After a long summer of fighting, imperial forces reached the gates of Wakamatsu castle in October to quash the resistance, besieging the stronghold with 30,000 troops. Beyond its walls, 3,000 defiant warriors readied themselves for the final stand.

As the Aizu fought valiantly from the towers and trenches, most women remained behind the scenes, ploughing their energies into cooking, bandaging, and extinguishing cannonballs that pounded the castle day and night. But for Nakano Takeko, an onna-bugeisha woman warrior, front line defense was the only course of action. Faced with the mighty gun-power of the imperial army, Takeko led an unofficial unit of 20-30 women in a counter-attack against the enemy, felling at least five opponents with her naginata blade before taking a fatal bullet to the chest. With her dying breaths, Takeko asked her sister to behead her, so that her body wouldn’t be taken as a trophy. She was buried under a tree in the courtyard of the Aizu Bangmachi temple, where a monument now stands in her honor.

Throughout history, most Japanese women were subject to rigid social expectations of marriage, domesticity, and motherhood, but there also existed women warriors like Takeko who were known to be to be every bit as strong, capable, and courageous as their male counterparts. They belonged to the bushi class, a noble class of feudal Japanese warriors, and helped settle new lands, defend their territory, and even had a legal right to supervise lands as jito (stewards). They were exceptionally skilled in combat; trained in the use of theKaiken dagger, the naginata, the polearm sword, and the art of tantōjutsu knife fighting. Centuries before the rise of the samurai class in the 12th century, these women would fight in times of war to protect their homes, families, and deep sense of honor.

After the Meiji Restoration in 1868—a new era of imperial rule that stood for modernization, industrialization, and Westernization—the Samurai class who had once bravely protected the nation fell from power, and the legacy of the equally fearsome onna-bugeisha faded from view. Meanwhile, Westerners rewrote the history of Japanese warring culture, overlooking the heroic quests of the onna-bugeisha and elevating, instead, exaggerated representations of swaggering male Samurai and subservient Japanese women, clad in kimono and tightly-bound obi. Indeed, historian Stephen Turnbull regards “the exploits of female warriors as the greatest untold story in samurai history.”