One piece of advice which I despised hearing at the beginning of my career was that it would be necessary to revise my writing. “No way am I doing that,” this author thought, “who would have the patience to reread and change their work thirteen to twenty times, anyway? Professional authors may say they revise their work no less than eight times (at least) before sending it off, but I won’t have to do that!”

Ah, to be that young – and self-assured – again.

Clearly, since this subject has appeared before you, readers, this author did not maintain the idea that revision would be unnecessary for her. In fact, over time, I have come to (largely) enjoy it, at least with my smaller works. Revising my longer pieces isn’t as much fun (yet), but hopefully it will become so as time progresses.

My younger self would probably be aghast to find that I think this way. At one time, my vision of revising was very narrow; self-editing looked like a weight that would hold me down and prevent me from creating the stories begging for their artist’s attention. Have you ever seen a shackled dog try to chase a squirrel, only to be pulled up short by the chain holding him in place? That was what self-editing looked like to this author – a fetter that would hold me back.

Some of you may think this about self-editing, too, and that is why we are discussing this subject today. Yes, revising your work can be a pain in the neck. It is not always pleasant, and if one becomes wrapped up in “creating the most perfect manuscript ever,” they may never write anything else BUT that one thing they wish to make faultless. Revising has its hazards, but so does writing in general – which is why we are all here. We’re trying to write and learn from each other’s experiences, hoping to find a way to avoid the snares in our separate paths.

In light of that fact, the first thing to establish here is that self-editing is not a ball and chain on the author’s mind. After a while, it is not even particularly time-consuming – unless the writer becomes obsessed with it. Revising helps authors of every stripe to grow and become better at their craft (and probably to grow as people, too). Without the ability to self-edit, an author will stunt his/her mental expansion, making their work subpar at best, sloppy and unreadable at worst. 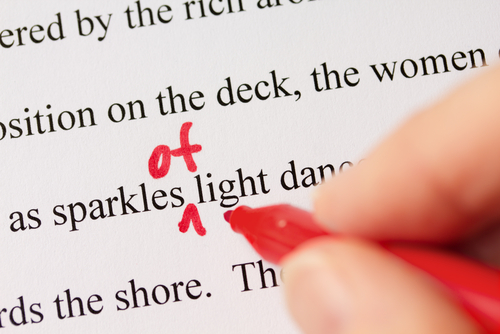 This author is speaking from experience; the number of things she learned to do after beginning to self-edit has been a boon over the years. When I began to revise my work regularly, I learned to pay more attention to my grammar while seeing which words I had a proclivity to misspell. It also helped me learn how to speed write at the same time I was reading what was coming down on the digital page, which made catching frequent spelling and grammar errors committed on the first write through much easier.

Do not misunderstand; I do not revise the entire story/article as I write. But if this author spots something that has been misspelled while she is typing, her long practice of self-editing allows her to go back and fix a couple of brief problems at once. It is one less thing to work through on a revision read, which will already include plenty of misspelled words and other difficulties. As someone I follow said, unless an author has to change a name/location/piece of world-building, save the in-depth revisions for after whatever you are working on is complete. Do not revise your paragraphs and sentences on the first go through; if you do, you may never get your project finished.

Speaking of which, self-editing taught me how to spot and rewrite run-on sentences on the second, third, or eighth read through. Finding these on a revision read is very important, since these sentences severely hinder the reader’s ability to understand the topic of the article or enjoy the “ride” of the story. During revisions I also learned to restructure my “purple prose” so it couldn’t be easily misinterpreted or turn a reader off because it was too “flowery.”

Most important of all, self-editing taught me how to cut things out of a story/article on my own initiative. For a while, this was something my beta readers had to tell me. They would say things like, “This paragraph doesn’t fit with what you are talking about,” or “This sentence is unnecessary,” and “Caroline, I realize that you like X, but going on about it for three paragraphs detracts from your point.” After hearing this for a while, a writer absorbs enough criticism that he/she can look at their writing and see the problem for themselves on a revision read, meaning that the writer can excise the unneeded information from a piece during an individual revision. This makes his/her beta readers and editors happy because their job is now significantly easier than it would have been if the author had not revised their writing solo.

It also means the writer can add things to a piece, too. Sometimes, in our rush to finish an article or our excitement with a story, we forget to make certain connections. For instance, if an author is enjoying writing a fight scene, she may accidentally leave out the part where her hero grabs for his sword or wounds his opponent. Rereading her work later on allows her to catch these mistakes and fix them before she hands her writing over to a beta reader or an editor ever sees the manuscript.

And, even though it stings, this constructive criticism allows for creative adaptation so an author can remove at least some of the frilly or superfluous paragraphs from their work without consulting a second or third party. This is still the hardest part of revising for me; if there is a paragraph that is particularly beautiful or which I think says something eloquently, I hate removing it from my work. But once the kink in the line is spotted, the self-editor in this author’s head becomes unable to completely ignore it, no matter how much she wants to do so. Invariably, removing the problem sentences/paragraphs makes whichever project I am working on much stronger than it would have been if I had kept said item in the article/story.

You have probably heard the phrase that writers have to “murder their darlings” when they self-edit. I have always found that recommendation a little hyperbolic; it definitely didn’t help me get over my initial aversion to revising my work. What, pray tell, did “murdering my darlings” entail? Hurting my characters more than they were already hurt? Altering the world I was creating? Yes, the authors giving this advice mentioned taking out paragraphs, removing/rewriting chapters, and readjusting sentences, etc. But the word “murder” always threw me into a tailspin of, “Won’t do it, won’t do it, won’t do it.” Maybe, if a different phrase or image had been used, I would not have had that reaction.

So here is the way I suggest that you think of revising, future writers: imagine you are building a house out of blocks. (Those of you who have played with LEGOs or Minecraft can easily relate to this.) Halfway or all the way through constructing this house, you realize that one room is in an awkward place. In order to make the house work better for you, this room has to be moved, or taken out altogether. Either way, the floor plan for the building has to be rearranged to some degree to make this change fit your plan for the structure.

Certainly, this is not a fun realization. You have just gone through a lot of effort to build this house for your toys/Minecraft avatar, only to figure out that it isn’t aligned properly. This means you now have to go back and do more work so that the building functions in a more reasonable manner. The first words out of your mouth will probably be, “Aww, man!” And the next words (if you haven’t been cursing yourself, the gamemakers, and the universe in general) to come from you will be, “This sucks!”

Truthfully, it does, especially when the item that the designer is creating is large. I had to remove the first chapter of my Space Marine/dystopia on this final rewrite, and then rearrange the following two chapters. And the first chapter (at least) still needs one last revision before I finally send this story off to a publisher. Revising is not fun – not at first. And even after it becomes more enjoyable, it can still be annoying. But is it worth it?

Yes, it is. It makes the writer better at his/her craft, helps them to grow as a person, and makes them a lot of friends in the editing and beta reading worlds. Remember, editors often have to sift through works sent in by authors who do not self-edit their pieces. These people like easy reads where they do not have to do a lot of work, and even if they turn down your story for some reason, they will remember that you gave them something coherent and legible. So when you send them something in the future, they will recall their previous experience with your work and jump at the chance to accept your story.

If you are an author struggling to learn how to revise your story, believe me, I understand where you are coming from. It hurts like blazes the first few times you do it – and sometimes after you become adept at it. But that is how you know that it is good for you; there is a reason why we often say “no pain, no gain” throughout our lives. Athletes of all levels have to practice until the sweat drips into their eyes and their muscles burn with effort so that they can perform at their peak during the game. Self-editing is the author’s mental equivalent. It is not easy or pleasant….

….But man, does it help you make a career out of writing!

One thought on “Read and Revise – What Revising Actually Is, and Why the Art of Self-Editing Is Important For Authors of All Levels”