Dave Filoni and I have something in common – aside from a fondness for a galaxy far, far away. We both love wolves.

I do not know why Filoni loves wolves. My love of wolves goes back to the time I first saw Steven Spielberg’s animated film Balto. I gave my parents no end of trouble after watching that movie, pestering them with questions about Alaska and the diptheria outbreak of 1925. Their answers didn’t always please me – there are many differences between the real story of the 1925 serum run and the movie version. I was very attached to the film’s take on events at one time, and so I didn’t necessarily like hearing that the movie did not reflect history with perfect accuracy.

Still, that the movie put wolves on the same pedestal, for me, as the lion is for most people. I wanted to place wolves in as many of my stories as I could, and I still do. They are magnificent animals.

Part of the reason I wanted to put wolves into my books originally was because they supposedly got a bad rap in fiction. I grew up during the movement to “save the wolves,” and I couldn’t help absorbing some of the propaganda that flew during the debates which raged around “reintroducing” wolves to the western United States. Wolves were always made the bad guys in fairytales, which was wrong; they were no more evil than any other animal. Like many others, then and now, I was going to change that outlook through my fiction.

Thankfully, I learned to separate fact from propaganda as the years went by. Eventually I recognized the fact that wolves aren’t large, peaceful doggies content to leave people alone. More than a few humans have been killed by hungry wolves, despite the oft repeated claim that “there’s not a single documented case of healthy wolves attacking humans.” Healthy wolves will take easy meat when they can get it, and we are much easier to chase down than a moose, a deer, or an elk. If it is a choice between a hapless human and a fleet deer, the wolves are going to choose the human. They won’t be successful every time, and they generally don’t put human scientists observing them on the menu. But I still would not want to meet a healthy wolf pack alone in the wild.

See that, readers? I love wolves so much that I am happy to throw facts about them at you, when that is not the point of this article at all!

The REAL point of this article is the wolf’s place in fiction and why the species will pop up in my stories so often. Since I have already answered the second question, I will now state the first: why does it matter that I will put wolves in my stories, other than I like them?

It matters because plenty of authors these days are still angry about the“abuse” heaped on wolves by mankind in the West over the centuries. This means they like to cast wolves as the heroes in their stories for no other reason than to get even with the past. In this way these writers kill their stories – or, in most cases, they kill the stories they are retelling.

We have all heard modern versions of fairytales which position the wolves as heroes and the heroes as wolf-abusing villains. Most people who “defend” wolves – i.e. repeat the “there’s not a single documented case of healthy wolves attacking humans” lie – will tell you that wolves are often made to play the bad guy in Western fairytales. They cite “Little Red Riding Hood,” “The Three Little Pigs,” and “The Boy Who Cried Wolf” as proof of man’s bias toward the lupine spectrum of the species Canidae. And while they are not wrong to say wolves are often made to play the bad guy, the fact is they are also far from right when they say this has always been the case for wolves in fiction.

In Western fiction, the wolf has historically been respected. Roman mythology did not treat the wolf as an enemy. The Romans associated wolves with the god Mars and considered the animals sacred to him. This is made apparent by the fact that a she-wolf is supposed to have raised Romulus and Remus, the founders of Rome, after their great-uncle ordered their deaths.

This she-wolf became a symbol of Rome, both for the Romans themselves and for their allies and enemies. When people raised a flag bearing the insignia of the she-wolf, they were either Romans or they considered themselves to be Roman. In the provinces this flag was generally seen as a sign of allegiance to the Republic and, later, the Empire. Even today, the wolf is respected in modern Italy. The Italian Republic’s national animal is the Italian wolf.

So here we have a Western mythology (fiction), thousands of years old, which venerated and respected wolves. And this mythology did not prevent the culture – or the people that built it – from recognizing the fact that wolves were dangerous predators. While the Romans refrained from intentionally harming wolves (that is, they did not hunt them for sport), they did hunt the animals when they threatened livestock or came too close for comfort.

This alone should prove that the claim that wolves have been eternal bad guys in Western fiction is bogus, but there is more. Teutonic myth has evil wolves like Fenrir and wargs in it, to be sure, but it also has the creatures being used as mounts by certain human-type people. Hyndla and Hyrrokin rode wolves, as did other near-human, non-threatening creatures in Norse myth. Odin himself had two pet wolves which were regarded as good omens by the Norse. By my calculations, that makes two Western mythologies which respect and honor wolves, while also recognizing that animals can be evil or good just the same as humans are.

Lest you think I jest, readers and future writers, I do not. Animals have souls, though they are mortal and irrational, unlike man’s immortal and rational soul. Therefore they can choose, in a limited manner, between good and evil. One such case occurred years ago in Africa, where two lions showed a preference for hunting men. They had enough cunning to prefer men to other prey, and became such a nuisance they had to be killed. Doubtless, there are other natural predators with similar predilections. 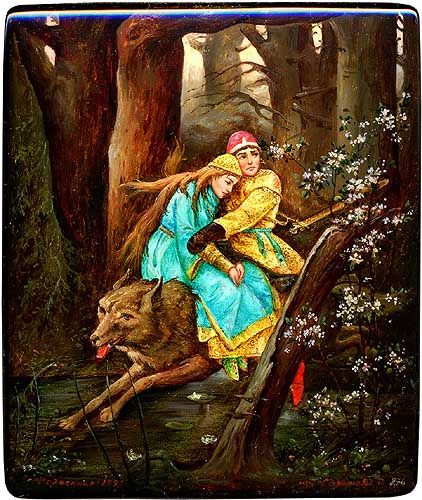 As for all European fairytales making wolves the villains, that is not true. There is a Russian fairytale where a very patient wolf helps a prince on a quest to capture a magnificent bird. I say he was patient because the stupid boy went to get the bird and stole the cage with it, which the wolf specifically told him not to do. After that, the dumb cluck stole a horse with a golden mane, and then a princess. So if sticking by that poor doofus does not make the wolf in Tsarevich Ivan, the Firebird, and the Grey Wolf a hero, then I do not know what does.

But let’s go back to those reconstructed fairytales where the wolves are the good guys and the pigs, the shepherd boy, and Little Red Riding Hood are evil axe murderers. These are not real stories. I do not say this because of the fact that the writers try to paint wolves as good creatures here, but because they reverse good and evil under the guise of “righting the wrong” done to wolves.

We have just seen that there is no wrong to right. Wolves have been respected and feared throughout literal and fictional history. Ancient Rome and the Ancient Norse understood that wolves were beautiful and magnificent animals worthy of respect. Just so, they also saw the potential danger these beasts posed to them and their property.

The reason the wolf was “vilified” in European fairytales had less to do with animosity toward the wolf as a species and more to do with warning the children who heard the stories. Remember that the moral of the story of “The Three Little Pigs” is that diligence in work provides protection from life’s predators. Parents weren’t just warning their children to work hard to keep wild animals out of the house; they wanted them to work hard so that human predators would not be able to take advantage of them.

Little Red Riding Hood bears a similar message, warning children to watch what they say. Little Red Riding Hood’s glibly telling the wolf – i.e. the human predator – that she is off to see her grandmother on the other side of the forest allows him to beat her to the house so he can eat the old woman. He then lies in wait for the girl he truly wants to devour to come in and tries to eat her. You could actually see this story, now that I think about it, as an allegory about rape, if you wanted.

If you look at these two stories as they were originally conceived, the moral in them is quite plain. In both stories the wolf, the apex predator of Europe, represents men who will take advantage of other individuals’ laziness or carelessness to enslave or “eat” them. Little Red Riding Hood is a tale which warns children against blithely trusting strangers who, while they may not want to eat them, will happily molest and kill them. The Three Little Pigs warns against slothfulness, lest human predators take advantage of the idlers.

“The Boy Who Cried Wolf” has the most obvious moral of all. In that story, the wolf is not actually portrayed as evil. He is just doing what comes naturally; here is a bunch of hapless prey right under his nose, with only a little boy to guard them. He doesn’t know the shepherd boy has been making fools out of the townspeople; he is not here to teach the lad a lesson. No, the wolf comes to the herd to eat, and thanks to the young shepherd’s “harmless prank” he has himself a real feast.

My reason for telling you all this is that when I bring a wolf into my story, it is usually because I find them fascinating. But I will also bring them into my fiction to make a point similar to the ones found in these fairytales. On certain occasions it may be the same point. Sometimes, the wolves in my fiction will be the enemy; more often than not, they will be heroes. And sometimes they will just be normal wolves who walk in and out of a scene the way that real wolves do.

I will not avoid making evil wolves, readers. Just like humans, animals have a part to play in the “Long Defeat” that is history. For most, it is the simple part of doing what comes naturally. For a few, there will be a clearer choice between doing good things to humans and doing bad. Some will go one way; others will do the opposite.

As your entertainer, my job is not to save the reputation of wolves. Wolves do not need to have their integrity salvaged. God has taken care of them since the beginning of time, and while He certainly doesn’t mind our stewardship of them and our respect for His creatures, I think He can take care of their good name better than I can.

So when you meet a wolf in one of my stories, look beyond the fur and see what is inside. Because that is what really matters.

4 thoughts on “The Author that Wrote “Wolf!””